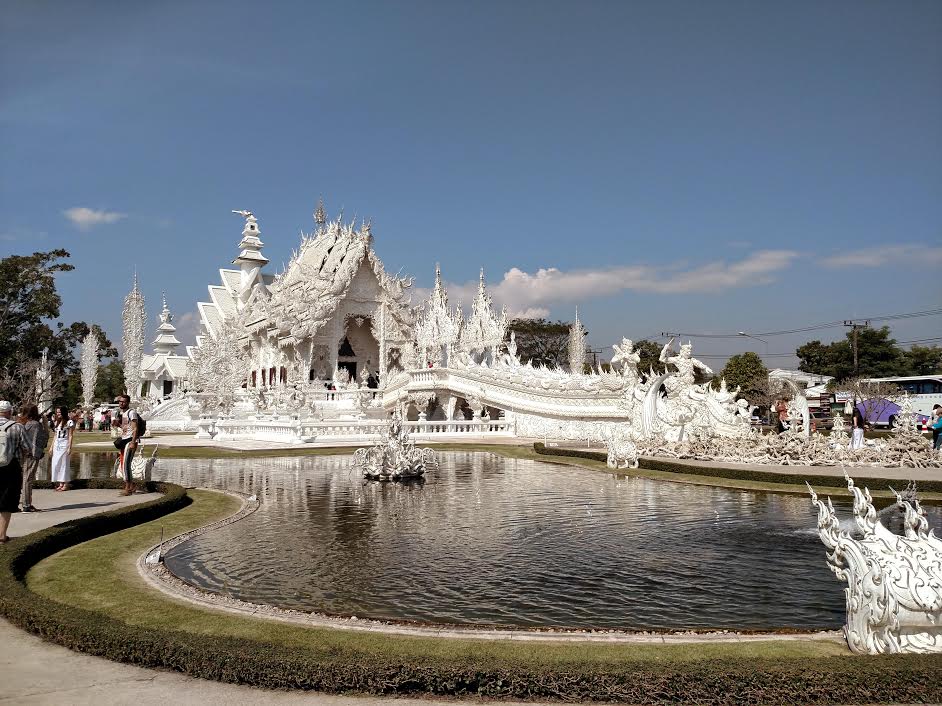 As many readers and my Facebook friends know I went to Thailand for a month in January of this year. I sent back a few pictures with some captions and commentary but have recently been asked about some of the details or an expanded version of my ‘trip report’  So here I will do just that and post a few more photos.
The trip was prompted by reconnecting with a friend I met in Berlin, Germany while stationed there in 1973-75. Thanks to the Internet I managed to find my friend and when invited to meet the Thailand family I eagerly accepted.
Planning for the trip took several months as I had to apply for a US Passport.  I booked the flight through Cindy Speakman of  Del Norte Travel then proceeded to research the specifics of travel to Thailand.
First consideration was vaccinations. Fortunately my medical concerns are taken care of by the VA so with some help from the Center for Disease Control (CDC) I easily discovered what I needed. The trip was planned so as to arrive in the Thai winter for the most comfort. Their winter would be like one of our better summers or just a normal summer in Gasquet; 85 degrees  70-80% humidity, very pleasant. However when the temperatures went below 70 deg at night I noticed residents putting on heavy winter coats and wearing gloves !
Between the middle of February and the end of October the weather is extremely hot and very wet in both their spring and fall months. The Thai people are used to it and work through all of it.  There are a hand full of “ex-patriots,” resident Americans and international foreigners who call Thailand home.
The starting point was Bangkok, flying in from Tokyo. The Bangkok International Suvarnabhumi Airport is a massive very modern and beautiful airport.  As one of the largest and most popular international destinations the complexity and attention to detail is truly impressive. Jet lag after a 23 hour flight (including a couple of layovers) was manageable as it usually is going East. Going West is a different story.
The airport is several miles from city center and we did not spend any time in the actual city.  Instead we went to a floating market on one of the many “clongs” or cannals. ​These markets have considerable traffic and take up the equivalent area of about 20-30 square city blocks.​ ​ All kinds of produce, prepared foods, craft items, art and fabric items one can imagine are a plenty.  ​ Afterwards we visited a typical tourist trap that offered elephant rides. ​Alongside the road to and from the market from our hotel one sees the distinctive architecture, notice the different vehicles, and yes they drive opposite the U.S. on the left side.  Traffic flow is amazing to the typical American. It is not for the faint of heart. Lines on the road are “only suggestions” as actual maneuvering of cars and trucks​ is more like a ballet of collective instincts not dissimilar to formation flying.  As chaotic as it would appear not once did I see an actual accident or vendor bender!
Three days later we flew to Chiang Rai, the northern most major city in Thailand.  From there we journeyed another 40 miles to the Mae Sai area near the Myanmar (Burma) boarder. Flying over the countryside exposes the vast agricultural wealth of the country. Naturally rice paddies and sugar plantations dominate but crops like soy, tobacco, pineapples, coconut, potatoes, tomatoes, oranges, lettuce, beans, etc. are sprinkled throughout. Most of the time here was centered around visiting family, and enjoying the day to day culture of gathering fresh food from a local market, and visiting nearby tourist attractions, e.g. Doi Tong, the Golden Triangle on the Mekong River, and the Opium Museum. We also took a day long tour of 11 prominent Buddhist temples. Buddhist temples are very numerous. Every residence and many businesses have a “Buddha house” at the entrance”  to protect all who live and enter there. There are also pictures in every home, business and periodically along major highways of the monarch King Bhumibol Adulyadej and Her Royal Highness Princess Maha Chakri Sirindhorn. Even though I kept a diary of my travels within the first week it was more than apparent there is no way to encapsulate all that is Thailand and describe it adequately.
From Chaing Rai (the northern Thai dialect mixes / replaces their ‘R’s with ‘L’s’ and pronounce Chiang Rai as Chiang LAI) we took a 3 hour bus ride to the resort city of Chiang Mai. The focus of this visit was general exploring but attending the annual Chiang Mai Flower Festival.
Just as with our local Lily Festival and the nationally known Rose parade they have as similar parade with brightly colored floats made of exotic flowers and thousands of people in numerous cultural costumes. Thailand, like the great “U.S. melting pot” has a diverse population consisting of various ‘tribes’ from within Thailand but host populations from Burma, Cambodia, Viet Nam, Laos and China.
While in Chaing Rai, a visit to a silk factory as silk is a major industry / export was a must. We also visited the infamous wooden umbrella factory to see a great variety of umbrellas being made by hand. Throughout the trip were driving a ‘motor-bike’ (similar to a Honda 90 in size) and taking the equivalent of a taxi called a “tuk-tuk.”  Tuk-Tuk’s (or taxi’s) are of several varieties.  Some are bike ‘rickshaws’, two passenger motor-bike powered, or the multiple passenger 8 – “as many will fit in” mini-bus. The original tuk-tuk (pronounced too-k – too-k because of the use of a 2 cycle diesel engine, usually used in water pumps in the rice fields) are slowly being replaced by small but modern Toyota pickups.  Seat belts are not required in Thailand even if there are any.  While there is a considerable military / police presence throughout Thailand (especially in boarder areas due to immigration and drug traffic) there is no ‘highway patrol’ Speed signs like lines on the road way are also “suggestions.”  Oh and there is no EPA, no smog controls / requirements so in major cities smog is a huge factor.
Lastly, the food. My host was my guide for the things I could and seriously “should NOT” eat because of the Thai chilies.  Fresh food from the markets is the rule for rural and city alike. Food markets are everywhere. Street food as well is plenty.  There is little if any beef but all kinds of pork, chicken, and seafood from octopus, catfish, talapia, to shrimp. Everyone including locals only drink bottled /filtered water. All produce (like lettuce, vegetables) with the exception of some hotels (that have hydroponic sources) is cooked. Diarrhea is a frequent problem of the traveler but with a high rice diet constipation can also be an issue.  Eating plenty of fruit is essential, but, for safety concerns it should only be fruit that needs to be peeled prior to eating.  There are 7-11 food stores everywhere, and several, Walmart type superstores on steroids called Big C – or Lotus.  The “product density” of anything and everything that ‘can’ be sold and bought is mind boggling.
​Thailand is a every economical and magnificent experience. I will be returning and highly advise if there is any way you can go there, do.​ I have been to Guam, Okinawa and Tokyo, which all have their distinctive charm. There is no place like Thailand and it’s people.  The hospitality and warmth of the Thai smile will never leave you once you’ve been there. Here are some more photos I took.  Remember all of them can be found somewhere on the Internet and I strongly suggest you do your homework prior to going. But each of them holds a special memory of being there that can’t be found on the Internet.