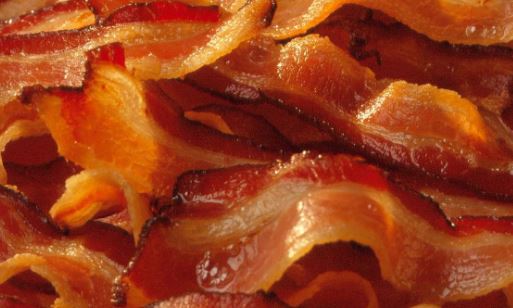 In honor of National Bacon Day, we had bacon with our breakfast at Denny’s Restaurant in Crescent City.

Honest to God, we didn’t know there was a National Bacon Day.

But since 1997, two girls, Danya “D” Goodman and Meff “Human Cannonball” Leonard founded Bacon Day as the one great day to bond everyone together.

Not only that, there’s International Bacon Day. It’s an unofficial observance, often celebrated on the Saturday before US Labor Day (the first Monday of September). Some cultures, however, celebrate on 19th of February, while others celebrate the day on the first Saturday in January after the new year.

It’s recommended that you eat bacon while watching Kevin Bacon movies like “Footloose”,
but there’s also “Tremors”. Well, he’s been acting since 1951, so there you go. There’s bound to be a lot of Kevin Bacon movies you would love to watch while eating bacon.

Things to eat or make out of bacon:
Hundreds of things. All kinds of recipes which include throwing bacon in to stews, salads and soups.
You can make roses out of bacon.
Candles, air fresheners, soap and popcorn.
Bacon and eggs. Or Canadian Bacon as part of Eggs Benedict.
I’ve heard of chocolate covered bacon but have yet to try it.
And of course, BLT Sandwiches (Bacon, lettuce and tomato….. we add avocado.)

So pig out on bacon… today.