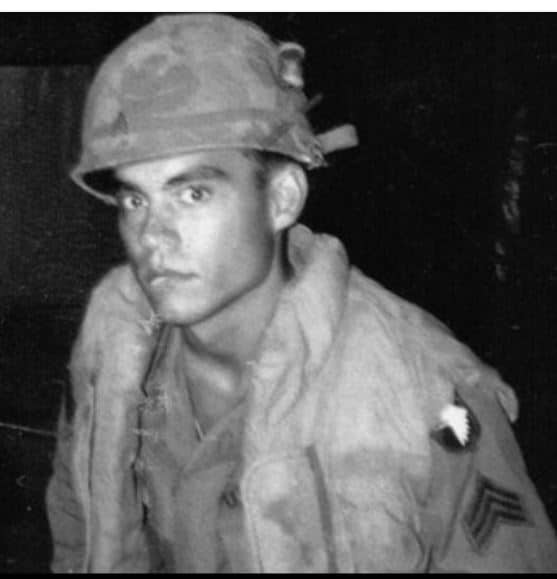 President Trump made it an official holiday in 2017 and encouraged Americans to display the U.S. flag in honor of Vietnam veterans.

(NOTE: On September 16, 1940 the US required all men between 21 and 45 years of age to register for the first peacetime draft in United States’ history.)

I enrolled in Orange Coast Junior College in 1966. Draft notices started arriving in 1967. I went in and talked them out of two. The third draft notice they had me. I was theirs.

It was the hippie era, “make love, not war.”

The first day in the Army, at Fort Ord in California by Monterey Bay – (it closed in 1994). They had me sitting on the ground along with a lot of guys from the South Bay area and they were all dopers. The drill instructor asked if anyone had attended College. I was the only one that raised a hand. People told me never to volunteer for anything in the Army but in this case I did. The drill instructor told the rest of the guys to listen to me as if they were listening to him. Because I was now in charge of all of the guys, I got my own room in boot camp. There were maybe 25 or 30 guys including some Hawaiian’s. The Hawaiian’s were bare footed and had never worn shoes before and their feet were very wide. I got them huge boots and we put paper stuffed into the toe area, but they still got their feet bloodied during exercises. They got out of the military in about three weeks.

The only time I did Kitchen Police (KP) was so I wouldn’t have to go on the 10 mile forced march.

After boot camp, which was mainly to beat the crap out of you, break your will and then build it back up. I got into artillery. For eight weeks we learned to shoot Howitzer’s every which way. Learn what each shell does because it had different applications.

Howitzer training. I spent time in Fort Sill, Oklahoma. For eight weeks we learned to shoot Howitzer’s every which way. Learn what each shell does because it had different applications.

I worked very hard to get into the Non-Commissioned Officers (NCO) academy. We were called “90 Day Wonders”. We were made fun of because we made it so fast. After graduation, we were awarded three strips and became Sergeants.

By airplane, New Years Day 1970. Very long airplane trip; about 20 hours. I got to come home for about a week before being shipped out to Vietnam. We left the US from Fort Lewis, Washington. I was scared. It was all unknown. I expected to have people shooting at me when we touched down. They called us “cheeries.” We had to do more trainign. Being told I was going to be in the 101st Airborne, I had to go in for more advanced training including a lot of psychological stuff.

I was field artillery. I didn’t always know where we were, but the enemy always knew where we were because of all the noise. We even went into Laos. I understand we weren’t supposed to be there, but we did go there. You can’t hide the artillery. We were always practicing, a lot for harassment purposes…. letting the enemy know we were awake. We kept our guys busy by always training so they wouldn’t think about home or their girlfriends or the family they left.

Firing the howitzer. There was seven bags of gun powder that went into the shells. We were told by radio what charge to use, where to put your muzzle. Very, very important because you didn’t want to shot further or not far enough. The infantry would be out there calling the shots. “We want some shells here now!” They would wake one of our sections and we’d start shooting. But, we had to be careful about not shooting over the top of our guys because the percussion was really bad. We had six howitzer’s in a circle and you had to pick the guy that was in direct line to hit the target while not having those shells go over us.

For the year that I was in Vietnam, it was daily firing.

I got a Bronze Star for doing something stupid, or rather I did what needed to be done. We were going to another fire base, hanging off a helicopter. I was sitting next to a guy and we were landing in a “hot LZ ” (landing zone) and you could hear bullets hitting the side of the helicopter. When we touched down and jumped out, the guy in front of me didn’t get up. I picked him up and carried him off to the side to get him out of the way because you only have five minutes to set-up your howitzer and be able to shoot with accuracy. I did what had to be done. I didn’t consider myself a hero.

Everyone got a ribbon for being in Vietnam.

I only had to spend 23 months in the armed forces. I’ll always appreciate President Nixon for getting me an early out.

I got back to Fort Lewis around the first of December, 1970. I took an airplane home wearing military attire.

When I got back home to Orange County, I went looking for a job. Tried not to tell anybody where I was for the past two years. Never had a problem getting a job before going into the Army, but the Vietnam war was so unpopular, it was not wise to mention it. It took me two months, looking for work at least five days a week. Finally, a friend hooked me up with a machine shop which is what I went to college to learn…. to be a machinist. It only lasted a couple of months because I couldn’t stand being indoors after spending so much time outdoors. Then I got a job at the Newporter Inn as a gardeners apprentice. Later I became a self-employed gardener for 10 years until being hired on by Southern California Water Company.

The Army taught me leadership; however it also taught me not to question authority. You had to do what you were told. I used to be more outgoing before going into the war. That was an unpopular war. I didn’t talk about the war for a good 15 maybe 20 years and then it was just sparse. It taught me to be cold hearted and not show emotions also.

I came home needing purpose in living. Because I was in the Army, I was able to buy a home with no down payment; and go back to college on the GI Bill which taught me a lot of what I needed to know about gardening.