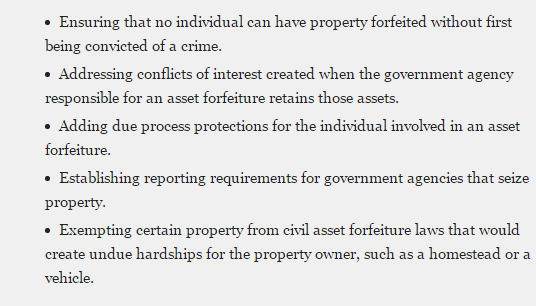 In most states, to reclaim seized property, owners must prove it is not connected to criminal activity, effectively inverting the American legal principle that suspects are innocent until proven guilty.

While seizing assets of those involved in criminal activities is an effective tool for law enforcement, abuse happens so often that the the system is broken.  As we saw in the Dave Egan case (BlackHawk Pistol series), what should have taken place was a knock and talk to find out if he had possession of the BlackHawk Pistol.  Not threatened, beaten, jailed and then robbed.  Egan is still wondering who’s got 52 of his guns.

As a result Fix Forfeiture, a 501(c)(4) organization that officially launched Tuesday, June 23rd, at an event in the Pennsylvania Capitol, plans to push for a significant overhaul of these laws. It has rounded up a bipartisan coalition that include progressive organizations like the American Civil Liberties Union and the Center for American Progress, as well as conservative ones like Americans for Tax Reform and FreedomWorks. The nonprofit will coordinate these varying voices — all of which have campaigned separately on the issue of civil asset forfeiture — as it lobbies for reform at both the state and federal levels.

It’s good to learn that politicos on both sides of the aisle agree.