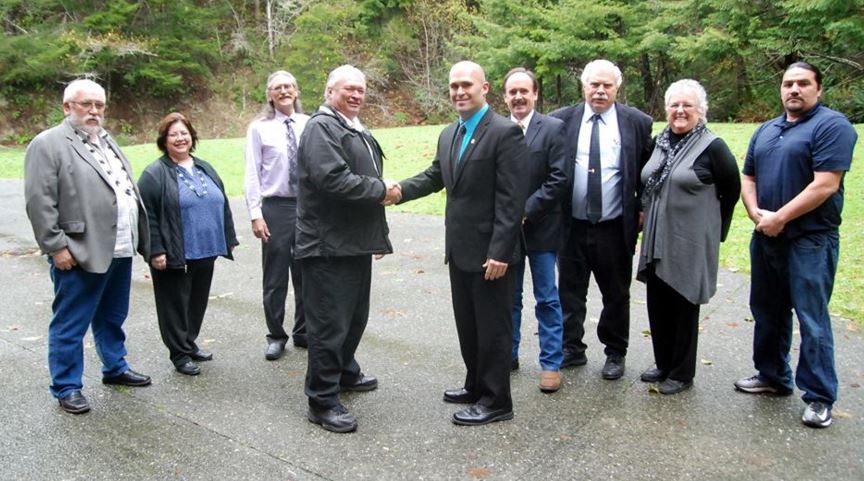 Yurok Tribe and the Del Norte County Board of Supervisors commemorated the signing of a cooperative memorandum of understanding December 15th  that will considerably expand law enforcement coverage in the far corner of Northern California.

The pragmatic pact will make it possible for qualified Yurok Tribe Department of Public Safety officers to become reserve deputies of the Del Norte Sheriff’s Office. Once deputized, the Tribal police officers will be able to enforce state laws on Tribal lands.

“The Yurok Tribe is very excited about this partnership between the Tribe and the County. We’d like to thank Sheriff Apperson and the entire Del Norte County Board of Supervisors for moving this important initiative forward,” said James Dunlap, Chairman of the Yurok Tribe. “This agreement will increase the number of police officers able to enforce state criminal laws on Tribal and non-Tribal lands.”

“We are equally enthusiastic about the collaboration between both agencies,” said David Finigan, Chairman of the Del Norte County Board of Supervisors. “Without spending a dime, we will see more highly qualified deputies on duty at any given time, making it safer for all county and reservation residents.”

There are several requirements that a Yurok Public Safety officer must fulfill in order to obtain the designation of reserve deputy sheriff. In order to qualify for consideration, candidates must be Peace Officer Standards and Training (POST) certified and pass a background check, which are also prerequisites for entering the Yurok Public Safety Department. Tribal officers also have to participate in an interview with the Sheriff, who will make the final determination of whether or not the officer will receive reserve deputy status. After an officer is deputized, he or she will complete a P.O.S.T. – approved Field Training Program. Additionally, the dually deputized officers are mandated to maintain the same in-service P.O.S.T. training regimen as regular Del Norte Sheriff’s Officers.

Currently, the Yurok Tribe cannot enforce state laws on the reservation, a result of federal legislation that was passed in the early 1950s. Public Law 83-280, except in very specific situations, gave six states, including California, jurisdiction over crimes committed by or against Native Americans on Tribal lands.

“This agreement provides a mechanism for Yurok Public safety to better protect and serve the whole community. I have no doubt that we will see a drop in the crime rate thanks to Sheriff Apperson’s commitment to public safety for all residents,” concluded Leonard Masten, Yurok Public Safety Chief.