No one has to go hungry in Crescent City. Here’s why. 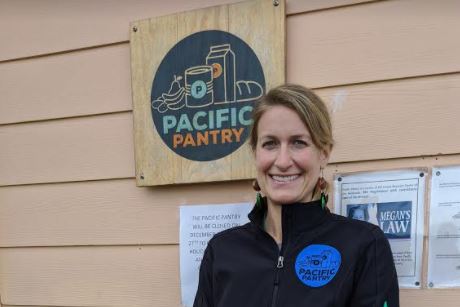 I walked up to the building known as First Five and Family Resource Center located at 494 Pacific Avenue in Crescent City. There were 2 large white folding tables loaded with boxes. Those boxes were filled to the brim with food. I was glad to see that one of them was kiwi’s. Two women were stationed at the tables and assisting a third woman load up her box with her choice of food items. Everyone was wearing face masks and in a cheerful mood.

The purpose of my visit was to explore and discuss the creation of a Food Co-Op in Crescent City. The person I was set to meet with: Amanda Hixson.

As we sat down and chatted, it became readily apparent that the bigger story was the work Amanda was doing with Pacific Pantry. My focus shifted away from the Food Co-Op for the next hour as I learned exactly what the Food Program Director does besides help fill food boxes.

We’ll start this as a series because it’s really too much information to take in all at one time. Amanda has been the Food Program Director for the Community Food Council for Del Norte County and Tribal Lands for the past year and a half. She was referred to me by Holly Wendt, the Recreation Director of Crescent City. I spoke with Holly because I learned that the City was giving out $5,000 interest free loans to businesses affected by COVID 19 and wanted to learn more. During our conversation, I mentioned that I came up with an idea of creating a Food Co-Op in Crescent City in order to create more jobs along with filling up a large 3rd Street storefront building that has been empty for far too long. Holly strongly suggested I meet and talk with Amanda Hixon. I took her up on her suggestion and so glad I did. Monday morning December 21st, we met at Family Resource Center.

Let me tell you why I think we’re so lucky to have this woman as the Food Program Director. When I asked her what motivated her to become involved, she replied, “I was doing undergraduate work in Tucson, Arizona. My field was environmental studies. My professor suggested that I had a strong interest in food.”

She cares about food and the environment She received her under graduate degree in Environmental Studies. What she didn’t mention is she was initiated into The Honor Society of Phi Kappa Phi, the nation’s oldest and most selective all-discipline collegiate honor society. Hixson was initiated at University of Arizona in February, 2018. You can look it up on-line. So, she’s smart.

A few years ago I learned that our public schools threw out good food into the garbage which made it’s way to the landfill. Amanda told me that even today four million pounds of food are put into the landfill. I don’t know about you, but it sickens me to learn of such waste. Food is meant for consumption. Even if each household collect their scraps from peeling and chopping and processing food, that can all be recycled into the garden. I told Amanda we have a compost tumbler so all our kitchen scraps are tossed in there with grass and dirt and pine needles and more and then after a few months, recycled into the yard. Being an organic gardener, I seldom waste food scraps.

Amanda’s got a lot of energy and guts and she needs it because as you’ll see she’s got a lot of juggling to do. Partly because before the Pandemic, they were providing food to 400-600 families a month. Those numbers have decreased somewhat since March.

Then there’s funding. For the past year, Community Development Block Grants (CDBG) have dried up between October 2019 and 2020. They may start to receive money again in April 2021. Other grants and donations and contributions have been sustaining them.

We agreed that a year round farmer’s market would be a desired goal especially something indoor for the winter. She’s also working on a mobile food truck to deliver to more remote areas of our county. When she lived in Idaho and worked on a farm, she described an incredible Food Co-Op where she was a member. Her suggestion to me about creating a Food Co-Op in this town is to find a niche that doesn’t necessarily compete with the other existing markets.

What if you know someone or a family that are having hard times and can use an influx of food? What can they do?

Amanda says Pacific Pantry located at the Family Resource Center is open Thursdays and Fridays: 2:00 – 6:00 pm and Saturdays: 10am – 2:00 pm. Clients may receive a free food box once per month during open hours. They will be closed this week and resume after the first of the year.

I asked her about the process involved in getting a free food box once a month and what could a family of four expect to receive?

She said, “It takes about five minutes to sign in. That includes their name, address and demographic questions like the number and ages of their children. Then they could receive about 15 food products.” I asked, “Does that mean like one orange?” She said, “No. More like four oranges would be counted as one item. Then they could also get milk, eggs, and other fruits and vegetables.”

Now once a month doesn’t seem like a lot. But as we go into more detail in this series, you’ll learn about so many other opportunities like the Community Gardens. Like classes on eating healthy. Like learning to raise food and preparing food. I mentioned to Amanda that I built a plastic bottle greenhouse at our home. That’s a project that’s so simple anyone could do it from 5 years old to seniors. I think I saw a twinkle in her eye and the gears grinding in her brain.

There’s no reason for anyone to go hungry in Del Norte County. But again, we’ll go into that in more depth in the next article. Right now I think we’re very lucky to have Amada Hixson as the Food Program Director.

2 thoughts on “No one has to go hungry in Crescent City. Here’s why.”