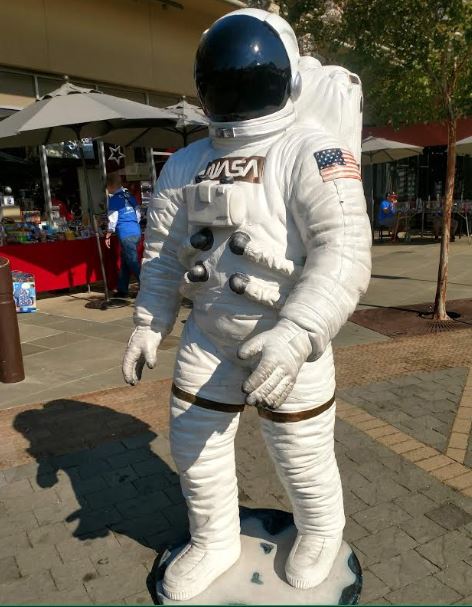 The Space Station Museum in the Pacheco Plaza Center 464 Ignacio Blvd. Novato, California
hosted the annual Novato Space Festival 2018 on Sunday, 5 August.
It was attended by over a thousand children, adults, educators and space enthusiasts eager to learn about space and meet several real astronauts.
Along with several information exhibitor tables it featured talks and a panel discussion with the following astronauts:
They were joined by Dr. Jill Tarter, Astronomer, SETI Institute, and Ed Rezac, Hubble Engineer, EVA/EVR Systems.
The Festival opened at 10 am with talks by several of the Astronauts about their experiences on the space shuttle and in the International Space Station. Later in the after noon a panel of astronauts grouped together to talk about the future of the space programs and at each presentation was an question and answer session.
Topics of the talks were about the experience of microgravity, life aboard the Shuttle/ISS, the missions and experiments they conduct. There was no shortage of questions from both children and adults. In addition to their talks they made themselves available for photo opportunities and book signing. The Space Station Museum was open to the public (see the link for further information) which had several displays of space suits, model rockets, space mission history, and various space related merchandise for sale. Some of the exhibitors included The Astronaut Scholarship Foundation, The Buck Institute, California Academy of Sciences, Morrison Planetarium, guest appearances by R2-D2 and a Storm Trooper, The Planetary Society, Michelle Rouch-Space Artist, NASA Ames, Penguin Empire Robotics, USS Hornet and of course, representatives of the National Space Society (yours truly included) along with others.
As everyone knows, we are well into the 21st Century.  As well, we all know we are now living in yesterdays future.  The advance of science and technology hold tremendous potential.
Todays future will belong to our children who very well may be the first to step foot on Mars and surely see the commercialization of space as never before. I am reminded of my youth, the Kennedy years, the space race, first man on the moon. The space race that spured the science and technology that brought us todays computers, modern medical miracles and a myriad of everyday things we take for granted.  The time has come to light to encourage our children to reach for the stars.