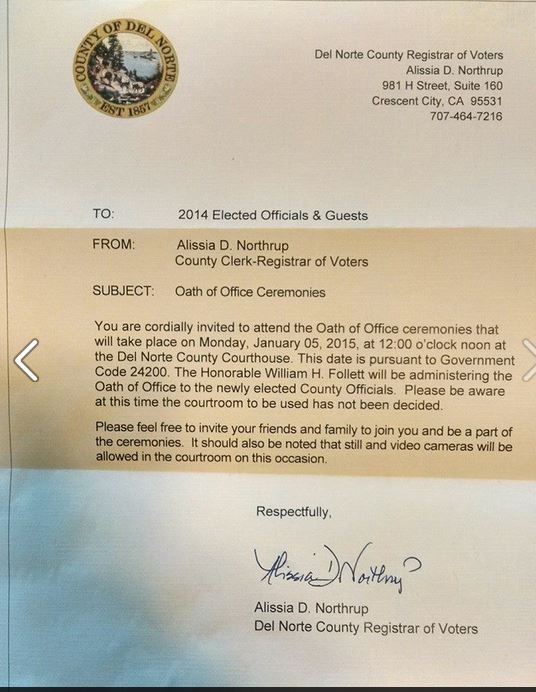 Monday, January 5, 2015 at noon.  Be present at the swearing-in of not only Erik Apperson as the new Sheriff, but also Darren McElfresh as the new Judge.

2015 may prove to be one of great significance.  With the changing of the “guard” so to speak, will the people of Crescent City/Del Norte County live to see a level playing field at long last?

Will we start to see cooperation between the City Police, Sheriff’s Department and the Indian Tribes Police Department?

Will we see less violence, less threats, less lying and stealing by the Sheriff’s Department and more cooperation and helpfulness by their staff in their dealings with the people of the public?

In conjunction with the new District Attorney, Dale Trigg, and Judge-elect McElfresh, will the sentences handed out in the courtroom be commensurate with the crime? Will all people be judged the same regardless of their family and political ties?

Will justice be swift or will more people languish in jail a year or more?

In other words, will our community become one of law and order?  Or, will we continue to be the slaves of those that have lorded control over us through their good old boy antics and their cronyism at virtually every level of our political and governmental strata?

We must all remember that these “public servants” are paid for with taxpayer dollars.  They have squandered our dollars.  The old guard has been voted out.  The people have spoken.

People, continue to educate yourselves. Continue to strive for change. Don’t give up on making things better.

4 thoughts on “Oath of Office Ceremony”