Oh Where Oh Where Is There Someone To Vote For? 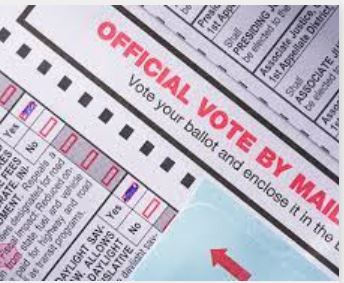 It looks like the kick off for the 2022 election marathon has commenced
with the opening round of aspirants turning in their paperwork
announcing their candidacy.  The preliminary round of sparring which
includes the offices of Supervisors for District’s 3 and 4, the sheriff,
the district attorney, tax collector/assessor, county clerk/recorder,
and the superintendent of schools, has now officially opened as of this
past Monday. Thus far the political victims to be sliced and diced over
the coming election season have resulted in mostly familiar names,
Katherine Micks to remain as the County’s District Attorney, and Randy
Waltz as Sheriff.  Looks like Gerry Hemmingsen has decided to hang up
his spurs in District 4 and two new contenders are set to face off for
the soon to be empty seat.  Both Brian Stone of Harbor Commission Fame,
and local realtor Patty Adams are set to duke it out should Gerry
Hemmingsen ride off into the sunset and no other steps forward.

Thus far a pretty lean stable of potential contenders for any of the
above mentioned seats have come forward.  It would be nice to have a “a
few more good candidates” to step forward into the ring to see what our
County’s next round of community leadership might look like.  Never fear
as according to our current Clerk/recorder, Allissa Northrup, potential
candidates have until March 11th to submit their paperwork, and five
days longer if current incumbents fail to re up.  Ms. Northrup also
added that she and Clinton Schaad will be filing paperwork to retain
their respective offices.  Thus far no one has filed for the offices of
tax collector, assessor, or superintendent of schools, currently held by
Barbara Lopez, Jennifer Perry, and Jeff Harris, who is also the School
District’s superintendent.   District 3’s supervisor, Chris Howard has
also failed to file as of the current posting.

Normally most of the County’s positions do not offer much in the way of
variety, and as such we as voters do not have the luxury of determining
whether or not the best person suited for that position is the current
occupant.  Can we do better becomes the age old question?  If we had
others to choose from, one never knows.  Certain current officeholders
have thus far not covered themselves in glory and could likely be
replaced by others who would.  Running for office to replace current
office holders could spark new and renewed faith in the government
process.  Something that had certainly been tarnished by current office
holders nation wide.  Even at this local level a growing sense of the
public becoming orphans at the behest of local officer holders has been
revealed.

Ever thought of giving it a try, now might just be the time. Current
direction by the County’s leadership and bureaucracy is listless and
without direction.  Too many decisions made like robots with little
consideration for how it might affect local citizens.  The remedy might
just be that dedicated person who actually has the citizenry’s welfare
as a priority instead of the County’s “elite”.