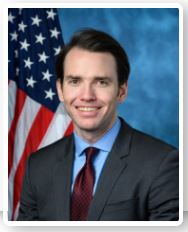 Today I spoke with Joe Biden at the White House. I pointedly asked the President to make good on a promise he made to my constituents in 2021. I’ll be able to share more details soon.

If I’d had time, I might also have given him some recommended reading. Namely, a new Washington Examiner profile headlined: “Calif.’s new GOP Congressman Kevin Kiley is on a mission: Gavin Newsom’s disastrous policies can’t spread to the rest of country.”

In explaining the reason for this mission, I might have directed Biden’s attention to Newsom’s home of San Francisco. A new report shows it’s losing residents at a faster pace than any major city in U.S. history.

Another rapidly declining city, Los Angeles, just provided a fresh demonstration of what’s driving people away: the Thin Blue Line Flag has been banned from the Police Department. As of today, the flag is now proudly on display outside my D.C. office.

As for Newsom, accountability is on the way. Congress is investigating the record-setting $30 billion in EDD fraud he allowed. And yesterday, his attempt to punish doctors for COVID “misinformation” was challenged in court. The judge called the law “nonsense.”

I am also co-sponsoring two new bills to end the COVID insanity: HJR 7 to terminate the national COVID emergency and HR 185 to end the vaccine mandate for international travel. Yes, we are on a mission – and won’t rest until it’s accomplished.