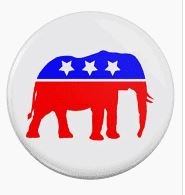 At a recent event in the humble “STAR” chambers of the local Republican
Party, the press and all uninvited guests were denied access to a
meeting of the local Republican Central Committee to enable those
specific members to offer “endorsements” for local candidates in the
upcoming June primary.  It was labeled a “closed session” as if the
contents of the meeting were somehow secret and not for assessment by
even the rank and file members of the local Republican Party.  How
charming.  I am not quite sure who is running the show for the local
Republicans, but they most certainly know how to put a giant foot in
their collective mouths with activities like the circus performed on
Wednesday night last at 6:00 pm.

I am quite sure that those local members of the Republican Party that
were “dis invited” are just thrilled about having their voices muzzled
by Central Committee President, Karen Sanders, and her “muscle” Jason
Greenough, also known as Crescent City’s sometimes Mayor, who was
moonlighting as the Central Committee’s bouncer at the door.
Irregardless of the action taken by the Central Committee to hold a
“closed session” to discuss political endorsements and talk about
measure “R”, it is a comedy of epic proportions that the “closed and
secretive session” this past Wednesday will not become common knowledge
in the community even before the “Star Chamber” of the Republicans has
the opportunity to lay head to pillow following the secret enclave.

This article is not intended to expose the contents of the meeting, that
will come later in a future article.  It is merely to point out to
members of the local Republican party that the party’s Central Committee
does not feel you have any place in their group of policy makers who
have been selected to speak for the local Republicans.  Not of course,
do these self appointed elites, feel that the rank and file have any
thing to offer.  The real decisions must be made by those that have
“special” dispensation.

Isn’t it about time that real Republicans take charge of the local group
and shed those that merely pretend to be Republicans when it suits
them?  It is a constant amazement to me, not a registered Republican,
who supports that which are the core principles of the Party, to see the
locals in charge of the Party, for the most part, stray from the party’s
principle values of limited taxation and smaller government.  Those core
values are something I most certainly support without reservation.  But,
and here comes the “but” part, it becomes difficult to associate with a
group that some, many in charge, do not adhere to those core values.  It
is something that seems to have infected the Republicans, even those
that remain true to core principles, yet allow local party’s to behave
in such autocratic fashion as Del Norte County’s does.

I could care less that I was refused admission to this “closed session”
as a member of the press, as it is ludicrous to think that all the
secrecy in the world will prevent the public from finding out what
transpired, yet it gives the hesitant one more reason to distrust the
party system and government in general. Don’t think it wasn’t noticed
that government was well represented in the conclave of the “Star
Chamber” on Wednesday evening…… It would be hard to imagine most
local Republicans would be “okay” with the display and not make an
effort to do something about it.   As I have said throughout this
piece,  it is hard to conceive of folks in the position of looking for
those that truly represent them, would find it in the local party.  The
watch word for most things in this Country is that organizations be
transparent and not “closed”.  There was nothing about this “closed”
session that required it to be “closed”.  It is truly unfortunate that a
local Republican Central Committee is uncomfortable with the idea of
transparency……   More later.

6 thoughts on “One Of Del Norte County’s Secret Societies”