Our Governor In A Clown Suit Again 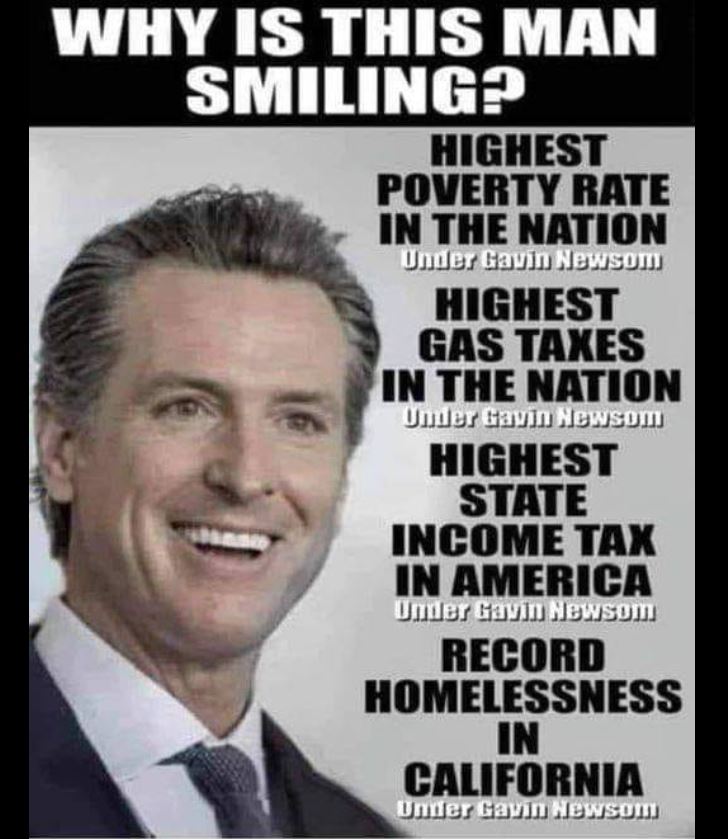 It has been awhile since I weighed in on anything at the State level,
but it seems our “Empty Suit”, Governor Newsom has been working over
time being involved a whole series of self inflicted wounds.  Apparently
it started with a family vacation in Montana. You probably know it as a
“no go state” for spending tax payer dollars.  The issue of why,
surrounded the state’s government in Montana being mean to the
LGBTQ…whatever communities;  hence, Montana and seven other states
made the list of “no tax dollars being spent there”.  The problem being
is that Newsom dragged his state funded security team along with him, a
big No No. Naturally, he didn’t want any one to discover his bit of rule
breaking, but what else can you expect from the ” rules for thee, and
not for me” governor of the state of California.

Yet, the Newsom follies did not end there.  It looks like the state,
hyperventilate, hyperventilate, is once again missing the emperor during
the continued STATE OF EMERGENCY in California, compounded by an
extended trip to Washington DC to receive an award for being an
“innovator” in Education policy   This unmerited award was produced by
the National Forum for Educational Policy in recognition of California’s
governor for his creation of policy in a state that consistently has
ranked in the mid forties in educational achievement.  While Hair Gel
was grand standing in DC for an award he was not deserving of,
California students have continued their decline in overall performance
apparently unnoticed during his time in office.

When the empty suit finally drug himself back to the state, he promptly
began signing bills that allow citizens to sue gun manufacturers, a
veritable deluge of bills on fire prevention, homelessness, and abortion
services.  But lest we not forget his go to the preventative for all
things evil in the world, Climate Change initiatives.  As inflation
increases, supply chain disruptions abound, water and electric shortages
begin to take hold for not only the lower income and the poor in
California, but has begun to creep up the financial ladder to affect
more and more Californians.  His solution…..  to write individual
checks for up to $1,050 to 23 million families in California to mitigate
rising inflation in the state.  This $9.8 billion extravaganza is due to
hit mailboxes as soon as October of this year, just in time to influence
the November elections.  Of course those that do not vote properly are
more likely not to see the check until December, or January of 2023, if
at all.

On a side note, while Newsom was vacationing in Montana, and then on to
Washington DC to be feted royalty, one would think provisions had been
made to insure that the leadership was covered by at least the
Lieutenant Governor, Eleni Kounalakis, not so.  It was noted that the
Lieutenant Governor was in Greece at the time. So much for taking
anything our Governor does seriously while clinging to his state of
emergency powers while either in town or out.  Kind of makes a person
wonder what voters were thinking when they had the opportunity to
jettison this train wreck in the governor’s mansion when the opportunity
presented itself during the recall election.  And the empty suited joke
has his eyes set on a run for president of the United States.  Let’s
hope voters who live outside of California understand that while nothing
can approach the level of the  Biden Administration’s debacle, Newsom
has proven himself to be a close candidate for  “abject failure” in
California leadership for quite some time.