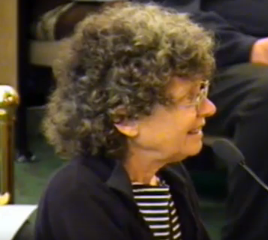 If you attack the stupidity and corruptive practices of those in control, they try to censor you, sanction you and get rid of you. I know from personal experience.  Mary Wilson has learned the same from her experience in dealing with the Grand Jury and the SWMA Board.

Surprisingly, county resident, Eileen Cooper, took Mary Wilson to task and even went so far as to say this about the task force and their meetings:

Let’s stop there. When the task force was looking for members, one of the qualities they were looking for was to have a local business owner because it would be an attribute not a drawback to have a business owner.  Ms Cooper’s perception of a conflict is more than ridiculous. I’ve known  Eileen Cooper for the past 8 years and she’s one of the most frugal people I’ve ever known.  She’s very aware of financial matters.  I have a hard time believing that Eileen Cooper really believed the things she said about Mary Wilson unless it was to bolster her fellow Democrats platform or she was fed misinformation.  Eileen has been involved in fighting sewer rate increases right from the start, so it’s hard to believe she can say that the task forces job is not  in addressing finances. Plus, if she had her rates go from $900 a month to $1900/month, (as happened to the Apple Peddler Restaurant in 2011) I’m sure she’s be absolutely enraged and want some explanations and action.

Let’s look at Richard Miles letter adding some clarification to the issue. This letter was handed in by Mary Wilson to the SWMA Board to be made part of the public record:

It was Richard Miles idea to do the interviews.  He goes on to state that if the Grand Jury were genuinely concerned about the act or discussion, why didn’t they question him or Mary Wilson about it.  He ends, “To misrepresent this conversation as unethical or initiated by Mary Wilson is factually inaccurate and wrong.”

Was Mary Wilson accurate in her portrayal of the Grand Jury’s report as lies, distortions and propaganda?  I believe the answer is YES.

Stay tuned in for Part 2, when we reveal more information about the missing $29,000 funds, and former Executive Director, Kevin Hendricks, associations with Grand Jury Foreman, Tod A. Roy.