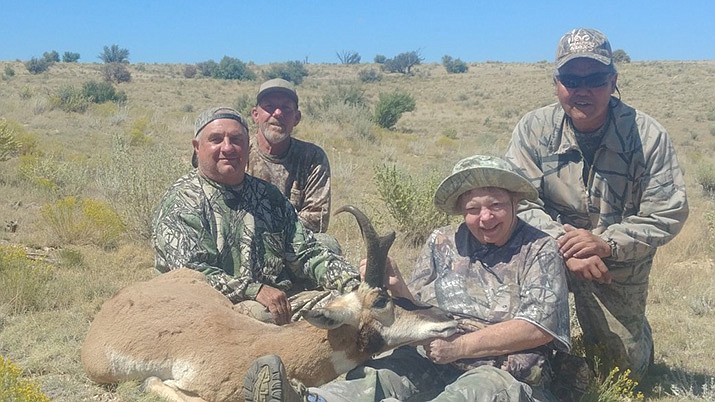 Page McDonald of Kingman holds the head of the antelope she harvested. She is accompanied by, from left, Marc Schwartzkopf, Hogan Roberts and Jay Chan. (Photo by Don Martin/For the Miner)

By Don Martin
Originally Published in the Kingman Daily Miner: September 16, 2019 7:25 p.m. Published with permission granted to www.crescentcitytimes.com.
Drawing any antelope tag in Arizona today is a tough task. And one of the hardest units to get a tag for is Game Management Unit 10  This massive unit is located north of Hwy 66 with the western boudary being the Hualapai Indian Reservation.  The nothern boundary is the Supai Reservation.  The eastern boundary is Hwy 280 at Williams.
Information on the numbers of applicants who applied for one of the 85 tags offered by the Arizona Game and Fish Department in 2019 aren’t available, but past data shows that typically between 4,800 and 5,000 sportsmen and women apply for tags there.  That means a super-low draw success of between 1.5 and 1.6 percent.
Kingman resident, Page McDonald, is one of many sportsmen to apply for a coveted Unit 10 antelope tag for a very long time.  McDonald said she had 19 bonus points going into this year’s draw.  That means she has applied, unsuccessfully, for a tag there for 17 years!  She also had a loyalty bonus point and a hunter education point.
Earlier this year, Lady Luck smiled on the 78-year-old and she was the recipient of tag No. 46 of the 85 issued for Unit 10.  For many sportsmen, it is considered to be a once-in-a-lifetime draw.
McDonald was pleased to hear that she had finally drawn a tag.  But then she got some life changing news.
She was diagnosed with lung cancer, and in March she underwent surgery to remove a portion of her right lung. After surgery, she started chemotherapy and that didn’t end until late July.
There were times when McDonald wasn’t sure that she would be physically able to go on her hunt; and she explored the option of turning in her tag and/or donating her tag to a non-profit organization.
But slowly, and little by little, this feisty lady got better, and as the season approached, she decided she was going to try to do the hunt, which for all intents and purposes, was going to be the only antelope tag she would ever have.  The decision didn’t come easily.  McDonald knew it was going to mean that she had to carry oxygen in a bottle on her back, and even then, she could probably walk only very short distances.
When some of McDonald’s friends heard that she had drawn the tag, and knowing how difficult the hunt would be for her, a number of calls came in offering to be part of her team for the 10-day hunt.
Initially Page’s team would be made up of Jay Chan, Mike Hulsey, Andy Musacchio, Marc Schwartzkopf and I.  Hogan Roberts would join us later.  These friends would turn out to be vitally important to the eventual outcome of the hunt.
The plan was to hunt antelope on the 750,000 acre Boquillas Ranch.  Those who want to assist on an antelope hunt on the Boquillas Ranch must pay a fee of $80.
It was well worth it in my opinion, as these guys are the best in the business when it comes to glassing and helping with the everyday chores that come with any hunting camp.
With assistant permits paid for and in hand, the next order of buiness was to locate a spot for a camp near where we planned to hunt.  We decided for logistical purposes, not to camp within the ranch boundaries.
I have hunted antelope, deer, elk and even desert bighorn sheep on the Boquillas Ranch since 1972 and I know the unit very well.  I had several other friends who had drawn Unit 10 archery antelope tags and whose hunts would be right before Page’s hunt.
Those folks generously and readily shared useful information.
One thing Page needed to do before the hunt started was make sure the scope on her rifle, a Remington Youth Model 7 Mountain Rifle, in .260 Remington caliber, was sighted in.
But that presented a potentially very serious situation.  McDonald had a port for medicine implanted on the sme shoulder that the rifle rested against that went straight to her heart!  She figured out a pad that would prevent the port from being hit or damaged, and off to the Seven Mile Hill shooting range she went.  McDonald has always been a good shot, and getting the rifle sighted in for the expected range didn’t take many shorts.
END OF PART 1.  Next up – Part 2 – Opening Day.
Page McDonald is the sister of Douglas Westfall, Publisher.