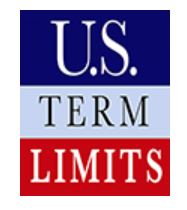 It seems when ever a segment of the population becomes dissatisfied with
their representatives at the federal level, be it of their own or other
congressmen and senators, there is a renewed call for term limits.  This
is nothing new, as it has been a remedy proposed nearly since the
country was founded.  Yet, the original framers steered away from the
prospect of term limits due to the mistaken belief that representatives
were intended to be merely part time legislators.  After all, the power
and scope of the federal government was to be limited to act on a very
few things.

Unfortunately, as the country grew, so did the government, to the extent
that it no longer limits itself to its constitutional confines.  It now
has injected itself into arenas it was never meant to occupy.  Too often
the federal government usurps power meant only for the states and the
federal courts have done little to curtail that activity.  It is the
same story with both the executive and legislative branches of the
federal government, which means that there has been a call for at least
term limits for congress and the judicial appointees as well, a number
of times through out the history of this country.   Fortunately, the
office of the president already has limits of two terms, which negate
many of the arguments against term limits for both houses of congress.

So what exactly does that mean for most citizens?  What is the process
for making that happen?  We learned in 1995 (U. S. Term Limits, Inc.  v.
Thornton) that it is not possible through legislative action at the
state level.  It must be through a Constitutional Amendment for it to
happen.  Since the formation of the country, nearly 250 years ago only
27 amendments have been successfully passed, the first ten are known as
the Bill of Rights, and were proposed and passed a mere four years after
the signing of the Constitution.  The eighteenth has since been
reversed.  As you can see it is not an easy task to amend our formative
document with term limits since it in effect curtails the activities of
powerful legislators who have made a career out of public office.  Hence
it would be difficult to do it through the federal congress where a two
thirds vote in both houses is one of the steps necessary.

Over the past couple of decades as the popularity of congress has
declined there has been increased interest in the passage of term
limits.  In 2016 the US Term Limits organization launched a new effort
to force congress to hold a Convention of States specifically to address
this issue.  Currently there are fifteen of the necessary state
resolutions of thirty four needed to force the convention.  There are
another fifteen states considering passage of the same resolution.  If
the goal of thirty four states is realized, it would still take an
additional four states to be on board to ratify it as an amendment to
the Constitution.  Thirty eight in total.

As you can see it is not an easy proposition.  State tuned for the
second part of this article where I will discuss the Pros and Cons of
term limits.

One thought on “PART 1: Term Limits”