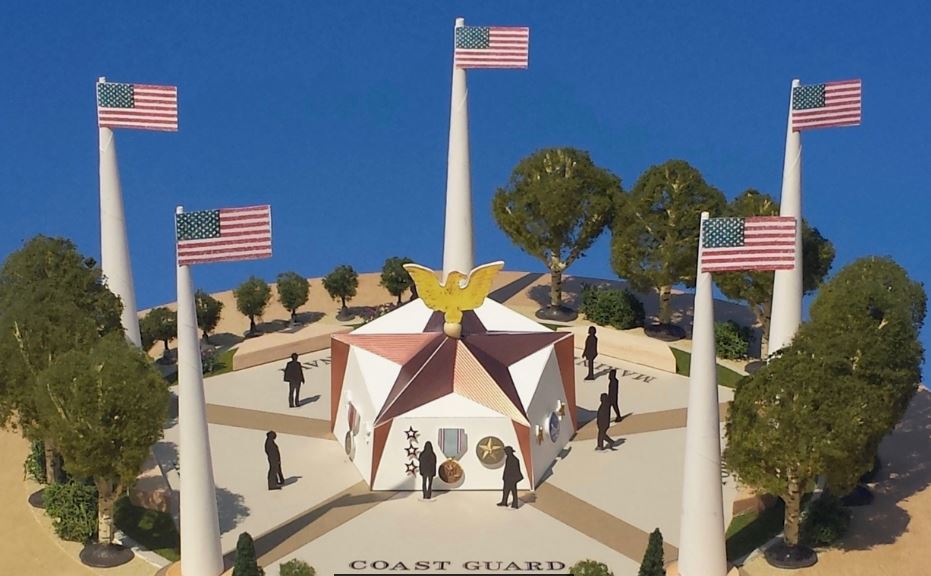 But it’s also very important to note that while in 2012 I had to relocate from Crescent City to Fortuna for medical and healthcare reasons.

I fully and completely continued on with my full-time commitment as “Architect of Record” responsibilities with especially heavy CA Coastal Commission coordination and required project revisions, along with nearly daily coordination communications for months with President Zeigler. So my having to relocate to Fortuna, had absolutely no impact on the progress of our Monument. Additionally and subsequently, I made numerous documented trips continually to Crescent City and back, for Committee meetings and close project coordination. It is important to note that even today most of my work is located out of the north coast region and working with experienced professionals and clear, timely communications represents absolutely no problems. I have even closely and successfully coordinated projects of mine, as far away as Valencia, Spain. So my current Fortuna location represents a non issue regarding me staying totally on top of our project and coordinating accordingly, until my colleagues colluded to by-pass me as Project Architect. Curious that everything had been going along perfectly with myself, our team, our project and the Committee until the Committee brought Adam Trask aboard as a Project Manager. It is clearly documented that the project went substantially down-hill from that time forward to today. Yet another example of poor project leadership and management.

So what’s the problem you ask? Actually, there are several associated problems.

Firstly, as a CA State Licensed Architect, I used my professional Architects License Seal Stamp to Wet-Stamp and Wet-Sign (my personal signature on every sheet of drawings) of all of my Construction Drawings I prepared and furnished to secure our Coastal Development Permit and local Building Permits (exclusively to the direct and exclusive benefit of the my Veteran colleagues and Monument Committee). Secondly, if there are any proposed changes to my original submitted and approved Construction Drawings, as project architect, I am supposed to be appraised immediately of such and respond accordingly. As it turned out, there were significant changes being made subsequent to my securing both the Coastal Development Permit and local Building Permit and nobody, least of all Project Mgr. Trask informed me of such (to this day, he denies such), even when I repeatedly demanded the current status in person and in writing. So what’s wrong with this picture? Just basic insubordination. Well, it gets worse, as Trask, Ziegler, Plack, Bradford and Committee continue to attempt to trivialize, dismiss, ignore and/or obstruct me from performing my job as Project Architect (of 10 yrs.) to insure the correctness of our Monument moving forward. Also, if significant changes, which there have been, are made, it requires re-review by the CA Coastal Commission Executive Director for approval once again. And, most importantly, with my name, license, stamp and signature on the drawings, if anything is missed, goes wrong or is screwed-up (by others), I am personally liable and responsible for such damages. So, why would I leave my professional integrity/reputation and myself exposed professionally and liability wise, while my Veteran colleagues are purposely avoiding me, obstructing &/or interfering with me doing my job as architect? In addition to them choosing to not communicate with me regarding my ongoing concerns, especially when they are directly benefiting at my expense and exposure?

So let’s talk about our Monument project gross mismanagement from a standpoint of project financing.

First of all, over the past ten years of our project there have been several individuals tasked with the responsibility of “Fund Raising” and pursuit of and securing of “Grants.” Too many people over all the years and in the end very little to nothing to show for. In the early years of our project I accompanied then President, “Chief Plack” making local fund raising presentations. Ben Cameron originally headed up local Fund Raising efforts. Additionally, early on in our project, the Late (RIP) Tommy Sparrow headed-up the pursuit of Monument project Grants. Unfortunately, with respect to the early pursuit of Grants, those efforts never ended up with any successes.

So this is where the Monument project financing efforts failed. It’s always a “chicken or the egg” issue. In order to truly pursue various Grants, you must have a project bottom-line cost estimate, so you know how much you are applying for.

Repeatedly, over the years I requested that the Committee formulate a methodology and game-plan to approach local, regional corporations, construction companies, general &/or subcontractors, groups/organizations &/or individuals who may be interested in making major contributions, donations, investments (funding, materials or labor), to our Point of Honor Monument.

I even identified specific names to pursue to include: Hemmingsen Construction, Tidewater, Haban, Northridge Electric, HomeDepot (local & national), etc.. I even repeatedly created the forms to secure: the contributing company entity, the name of the authorizing representative officer, the date, and the specific (per our Construction Drawings) “In-Kind” contributions to be made (in the form of a specific dollar-value). More recently, this was a task to be conducted by our relatively new Project Manager, Adam Trask. He never followed through so this most important responsibility never happened. Then even more recently this past spring Committee Member Craig Bradford was identified to head this effort up. And that never happened. The goal from a project financing standpoint (community “In-kind”, local fund raising &/or Grants) was to establish our project total costs, and then deduct the “In-Kind” dollar-value representations, and local fund raising efforts, so that we would then know more correctly what kind of and how much (specifically) of a Grant(s) we would need to go for. Makes since, but once again it never happened! But, from the very inception of our project we collectively knew that local community funding would never substantially finance the building of our Point of Honor. In the last couple of years I suggested that we needed to think out-of-the-box regarding our project funding. I suggested that our Committee team purse big league foundations, ie; The Gates Foundation, The Trump Organization, Apple Corporation, IBM, Oracle and so on. Obviously, once again, it fell on deaf ears as no one acted. Then there was the completely failed effort of pursuing supposedly numerous potential grants through the consultant we hired and paid, named “Granted Solutions”. Just last December, President Ziegler indicated in writing to me that there were 18-24 various Grants available to us. In the end, this spring after several attempts, Granted Solutions failed to respond to inquiries or return contacts. So in the end, the Committee spent consultant fees, once again, for absolutely nothing. Based on my plus 35 years experience, collectively, I call these individual and collective mis steps gross project mis-management. Thank You Veteran Committee leaders/members; Ziegler, Trask, Plack, Bradford and others. Because my Veteran Committee colleagues in choosing to “Abandon my Point of Honor visionary project,” of ten years this past May 26th, at this time, suggesting that it was apparently running too costly, after all of their collective screw ups, what a joke. This is referred to as attempting to defer &/or redirect their numerous failures onto me. For a little more Monument financial evolution and clarity I will offer the actual facts, which is that we all knew what the Monument was going to cost over these many years of evolution. In December 2008 we gave my construction drawings to Dave of local Hemmingsen Construction for a cost estimate, On January 10, 2009 Hemmingsen Construction provided us with a preliminary cost estimate of $440,650. So we had at that time an order-of-magnitude regarding Monument costs.