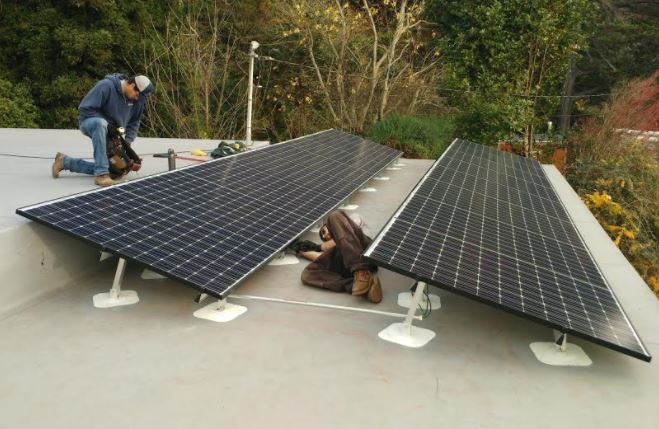 As an advocate for solar power, I’m obliged to address the concerns brought up by Samuel Straits comments to Paul’s Article, Part 2, all of which have a logical conclusion:

Solar power makes great sense, not only for your pocketbook but for the environment.

1) System cost: It’s best to understand the payback period. Generally, a solar system will cost the equivalent of 7 years of your cost of electricity.  Therefore, the math looks like this: Pay up-front your cost of electricity for 7 years to get the next 40 years of energy for free.  What’s so complicated about that? Each system will vary in cost. If you look at the original story, you’ll see that there’s a lot to consider before buying a system.

2) Maintenance: Sure, all equipment will conceivably require maintenance. New surface treatments with nano-sized titanium dioxide is used to make self-cleaning glass. This is just one of the many ways that solar panels can be made to require less maintenance. You might be surprised how little a thick coat of dust or pollen would reduce the energy production.  Commonly, systems are over-built by inexperienced solar power companies, to make up for low light conditions or with an expectation of increased demand. This is certainly one way to suggest that a slightly larger system can reduce the requirement for cleaning.

As far as equipment stability and reliability, the majority of components have a 25 year warranty.  Consider that the top-tier providers align only with manufacturers who have proven track records, and stability, helping to ensure that warranties will be honored. The choice of equipment by the solar provider will often suggest how profit-oriented they are. There are quite a number of solar providers that are using low-cost equipment. I’m not saying this is a bad practice, but just that you should go into the contract with eyes open and no fear.  You might want equipment more likely to fail in 10 years in the event you prefer to spend less.  You might instead prefer to go with a company that has years of experience and is more likely to honor their contract.

3) “When you say that you only paid $20 for one month, does that include the $113 per month that you pay for the equipment?”

4) On the subject of degradation, this will vary with the type of panel that you purchase and the conditions. Kyocera, one of the oldest solar panel manufacturers in the world, recently posted on the fact that a number of its early installations continue to generate electricity reliably nearly 30 years after installation. If you try to get numbers on this, you will find some agreement in the industry of a 1-2% degradation per year, but this is actually more of a curve, whereby the degradation reduces as the years draw on.

Again, this subject can be remedied by adding more panels to a system that was intended to be modified for increasing the output, not so difficult.  Indeed, Paul’s is one such system, whereby he could add more panels in the future, as he adds to his home, without requiring the replacement of the inverter, which is the most costly of all the components.

Indeed, it is important to realize that the panels themselves make up a small portion of the total cost of a system, justifying the practice of slightly over-building a system.  Regardless how large your system is, however; it will offset your energy usage by some amount.

Solar power in California has been growing rapidly because of high insolation, community support, declining solar costs, and a Renewable Portfolio Standard which requires that 33% of California’s electricity come from renewable resources by 2020, and 50% by 2030. Much of this is expected to come from solar power.

As manufacturing of conventional solar power continues to improve, it’s anyone’s guess as to exactly how long any system will continue to produce. The electro-chemical reaction that turns sunshine into electricity is known as the Photovoltaic Effect. Because the elements are inert, and do not change, it is technically eternal.  The slight degradation only occurs due to micro-scratches on the surface of the panels from the effect of dust, wind and time.

It is primarily with the electrical connections where faults can occur.  Solar power systems employ firmly-fitting connections that are weather-proof.  But they can remain this way only with technological improvements in materials.  That is precisely why we are having this conversation now.

Scientists have been improving all of the aspects of conventional solar power (silicon-based) since it was invented. Bell Labs in New Jersey announced that the world finally had an efficient way to turn sunlight into electricity. On April 25, 1954, Daryl Chapin, electrical engineer, Gerald Pearson, physicist, and chemist Calvin Fuller demonstrated their invention, the first practical solar cell.  The technology is essentially unchanged over the last 64 years.

Toward the end of your comment that lacks citations, the most difficult to overcome is the vagueness of your statement “As the materials used to produce solar panels become harder to acquire the cost will rise to the point that solar power in its current technological stage becomes cost prohibitive.”  You are again corrected. When you consider that conventional solar uses the most common mineral on planet earth.  The starting material, though very high purity, is silicon dioxide (SiO2), or sand.  Most rocks contain SiO2, such as granite.  Interestingly, the SiO2 for solar power comes nearly exclusively from the Spruce Pine mining district of North Carolina, FYI.  It is, however; only with global cooperation with countries like China, who are very forward-thinking, and have worked out the same equations that we are discussing in this memo to a much greater degree, that makes this wonder of technology possible.

Now it is possible for every homeowner, business-owner, and government entity to benefit from the advent of solar power — a MAJOR game-changer.  This is a result of technological advancements, global cooperation and economy of scale.

Then, there is a clear path to replacing the dirty energy that has historically fueled our industrial revolution at the expense of our environments.

Finally, you have an opportunity to add to the momentum of a revolution in energy. When you consider that the biggest users of solar power are the utilities, then it’s easy to understand that this is a “race” to go solar.

How are you doing in this race?

Are you advancing your knowledge sufficiently to prepare, or would you rather continue paying the utility their premiums at the expense of the environment?