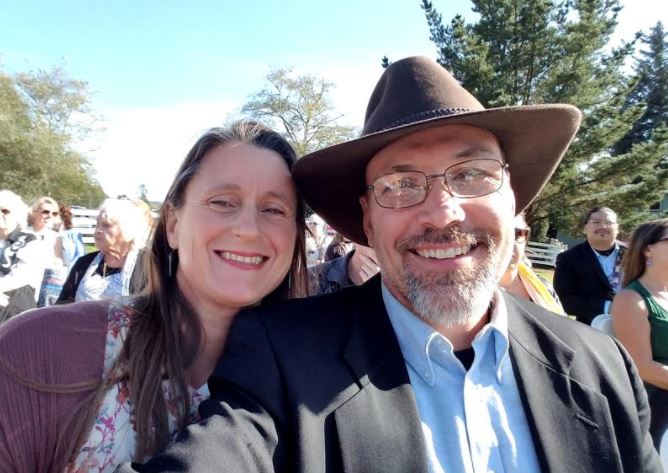 Roger Daley was the last to speak at the Republican Women’s luncheon (held the first Thursday of each month), that being April 5th. He currently sits on the School Board. He’s pastor of Fort Dick Bible Church located at 6725 Lake Earl Road. His family is rounded out with a beautiful wife and four great children.

One of the attendees at the luncheon video taped each speaker and put up Roger’s answer to recreational marijuana, “It’s bad law,” he said.  This video was posted to Facebook and subsequently Roger Daley got a lot of bad press from those that think if the voters approved recreational marijuana, then that takes precedence over ones principles and convictions.

In contrast to the picture painted on Facebook, Roger Daley is not your typical “prudish Pastor.”

He related to me, “Before I was eight years old, I knew many Hell’s Angels bikers.  They were friends with my father who painted pictures (mainly of women) on their motorcycle gas tanks.  We lived in Hayward.  My family was well acquainted with marijuana.  They used it, abused it, grew it and distributed it. I saw firsthand the damage and destruction that can do to a family.”

While exchanging views on the issues besetting our community, he agreed with the three other candidates in that he’s against SB 54, Sanctuary State. He agrees that something needs to be done about Sutter Coast Hospital and their exorbitant charges.

One thing I discovered about Roger Daley is that he does his homework.  Getting back to the cannabis issue, he posted two links to articles relating to problems that Washington and Colorado are now experiencing due to legalizing recreational marijuana.

Roger Daley recognizes that incumbent Gerry Hemmingsen is still running on the “same old tired issues” that Hemmingsen campaigned on 12 years ago.  He has done very little in the almost 12 years in office and Daley knew it was time to throw his hat in the ring to help bring about change.

One thought on “Part 3: Republican Candidates for Supervisor Attend and Speak at Women’s Meeting”