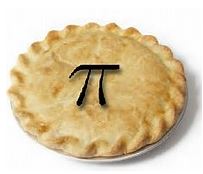 Today is the day that all those math nerds (genuises) get to shout out Pi to 10 digits or more.  Pi = By definition, is the ratio of the circumference of a circle to its diameter. Pi is always the same number, no matter which circle you use to compute it.  It is the most recognized mathematical constant in the world. Scholars often consider Pi the most important and intriguing number in all of mathematics

Pi was first rigorously calculated by one of the greatest mathematicians of the ancient world, Archimedes of Syracuse (287-212 B.C.). Archimedes was so engrossed in his work that he did not notice that Roman soldiers had taken the Greek city of Syracuse. When a Roman soldier approached him, he yelled in Greek “Do not touch my circles!” The Roman soldier simply cut off his head and went on his business.

The father of calculus (meaning “pebble used in counting” from calx or “limestone”), Isaac Newton calculated Pi to at least 16 decimal places.

Is it possible to totally calculate Pi or is it a number that reaches into infinity? Ummm…sounds like the answer to that is infinity.

Talking about math genuises, did you know who’s birthday it is today? Stand-up comedian, John Evans once quipped: “What do you get if you divide the circumference of a jack-o’-lantern by its diameter? Pumpkin π

And that about sums it up.  Pie I understand.  Pi….. well, I’ll leave that to the math nerds.