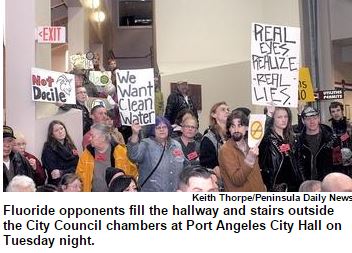 Credit to By Paul Gottlieb,

PORT ANGELES, Washington — Four City Council members are standing firm on the decision to continue fluoridation of the municipal water system, overriding a survey of water users and a recommendation broadly supported by nine department heads to stop the fractious practice.

Within minutes of the vote Tuesday night to reaffirm the council’s December fluoridation decision, opponents began collecting signatures to change the form of city government in a manner that the same city staffers said could hurt the city’s overall reputation and financial standing, as well as deny citizens home-rule authority.

The petition would require 477 signatures to be put on the ballot.

At the meeting were about 200 people, mostly fluoridation opponents, who poured out of the council chambers and crowded the steps to City Hall’s second floor.