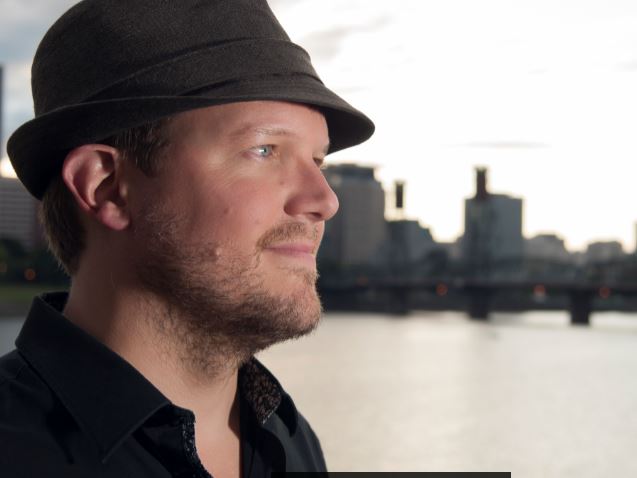 Portland based musician, Eric John Kaiser, has carved a unique niche in the Americana scene with his signature blend of songs written in French and English lyrics. An international hybrid, they exude European smokiness and poetry jacked up on pure US-of-A rock energy, with the boldness of hip-hop and tempered sometimes with a reggae lilt. “Manu Chao meets the 1969 Rolling Stones” is how one critic described it. “Parisian Americana” is what EJK calls it himself. His latest album – the fifth to date – is titled “Made in Gaspésie” and was recorded and produced in French-speaking Quebec thanks to more than $13,000 raised on Kickstarter.

Born in France to an American mother and French father, Eric’s music and career arc reflect his genetic and linguistic duality. Since moving to the U.S. in 2006, he has explored the far corners of North America, logging close to 10,000 miles on tour every year. He is frequently involved in cultural projects where France and America meet. He performed at the Smithsonian Museum in Washington, D.C., as an “Artist in Residence.” He played at San Francisco’s DeYoung Museum in support of the biggest French Impressionist masterpiece show to ever run in the U.S., on loan from Paris’ famed Musée d’Orsay. He has traveled to New Orleans multiple times thanks to artistic support from the Alliance Francaise where he taught workshops for grade school kids on the convergence of language and music. Not limited to just the United States, he brings his music annually back to France and Western Europe and has made forays into Ireland, Hong Kong and Australia.

It was an artistic grant from the Quebec-based non-profit Centre de la Francophonie des Amériques that led Eric to the town of Gaspésie in 2015 to perform in a huge music festival. There, he met record producer Guillaume Arsenault and blues-rock singer songwriter Jonny Arsenault who had recently appeared “The Voice” in Quebec. Seizing the opportunity to work with them, to explore the French roots in Quebec, and to focus and hone his French language songwriting, Eric launched a successful Kickstarter campaign to fund the project, the success of which is a testament to his broad appeal. He returned to Gaspésie in early Summer 2016, with this album being the fruit of those labors.

“It was really great to work with an all-French speaking band and someone as prestigious as Guillaume Arsenault,” says Eric John Kaiser. “The experience helped to bring my songwriting to a new level. It was very helpful to be immersed in the French language. I love Oregon and Portland, but I also feel a bit isolated here when it comes to getting help to work on my lyrics and my art from a French-speaking perspective.”

On Wednesday, May 17th, Eric John Kaiser will be hosting a CD release show at Port O Pints, located at 1215 Northcrest Drive, Crescent City.  The show starts at 8 pm and there’s no cover. His Fifth Full-Length Album, Sept 23rd “Made in Gaspésie” recorded in Québec Entered #14 in the Billboard World Chart!