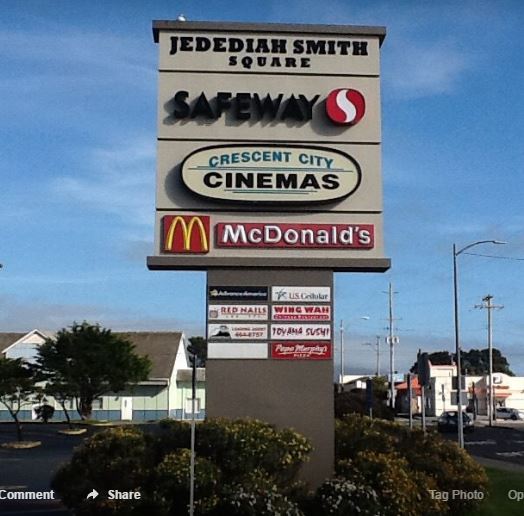 The Jedediah Smith Center is most commonly referred to as the Safeway Shopping Center.  Plagued with controversy over the last 4 years for a variety of claims including shopping carts lefts around the city, vagrants/homeless soliciting shoppers for money, and the appearance of the center being unkempt.  The controversy built up a head of steam when Supervisor Roger Gitlin started his “Take a Bite Out of Blight Campaign,” and urged Safeway store Manager Brian Ridgely to act.

That begat the brouhaha in a Board of Supervisors meeting when about 20 people of the public admonished and condemned Gitlin last September. But you know what?  Someone was listening and took action. Here’s what you’ll notice immediately:

For far too long, shoppers have been complaining about being hustled for money.  That left a bad taste in shoppers mouths and they took their business elsewhere despite signage like this:

Rarely would the local police department act or do anything about it. But now all of that has changed.

Gitlin happily reported, “It is with great pride that we recognize the major improvements on-going at the Jed Smith Center on business 101, in Crescent City. The Center is under NEW MANAGEMENT and the differences are startling.

Many of you Del Norters took notice of my efforts to Take a Bite out of Blight with no shortage of resistance.

Ownership / Management listened and the improvements are noteworthy. Master landscape maintenance company Randy Kirkland has brought the Center and perimeter appearance back to life. Management has hired private security and to those who fail to respect No Loitering signage, they are escorted off the property. Those who violate aggressive begging ordinance are also escorted off the private property center.

My congratulations to the Center.

Jed Smith Center is fast on its way to raising the community standard.

Please communicate your appreciation to ALL tenants.

Hat’s off to Roger Gitlin.  He’s not afraid to get down and dirty to help clean up our town.  It’s a simple problem.  Blight.  Whether it’s trash left in the parking lot, unkempt lawns and landscaping or homeless sitting in front of Safeway with their dog. This is a business district.  It doesn’t put our best foot forward when tourists or locals have to put up with indifference by the owners. Thanks for your persistence, Roger Gitlin.