Problems, Problems every where you look 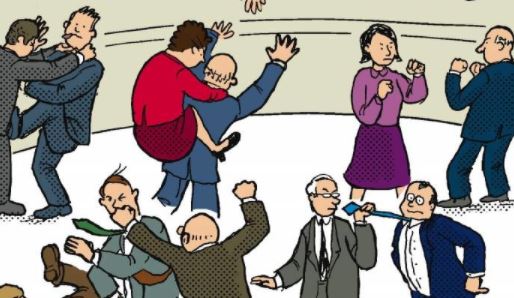 I suppose it shouldn’t be all that surprising that in a small rural
County in California that there seems to be problems wherever you
look.

2. An Airport Commission that fails to realize that a longer runway is far more important than a new terminal for growth.

3. The Fair Board that has frittered away some of its quarter cent sales tax money on luxury hotel rooms, liquor and good times.

4. A School District that has run through $25,000,000 in bond money and expects the community to pass another in the near future.

5. A City Council that thinks nearly a half million in sales tax revenue should be used to open the city’s pool rather than come to grips with the outstanding debt incurred with the new/old Waste Water Treatment Plant.

6. A Harbor Commission that is suddenly in love with solar power rather than worry about paying its debt to the Federal Government.

The list seems endless when you think about it.  Probably the most telling problem we have though lies fourteen miles south of Crescent City.

As most people in Del Norte County probably know by now, Last Chance Grade suffered yet another landslide which blocked the road completely.  Looks like it has become a yearly event after it starts to rain.  For over
sixty years the road going south has had to contend with almost annual
failures of that stretch of Highway 101 South, and for almost the same
amount of time the State has spent millions of dollars each time trying
to keep the right-a-way open.  It would seem likely that someone some
place would realize that something more permanent should be done, bypass anyone?

Because it is a problem that has plagued Del Norte County for years, one
would think that local leadership would make it a priority, and the
problem would have been solved years ago, but each group has passed it
on to the point that cost, regulation, red tape and indecision have made
it a monumental task.   It is not as though local leaders are unaware of
its existence, yet even the most recent group seem unable to realize
that a concentrated effort must be made to penetrate the relative
indifference and contempt with which Sacramento holds this County.   Lip service from the likes of our Senator and Assemblyman have not made much of an impression.  Our local representative at the Federal level could care less.  The inability to focus on a route for the by pass is mired in indecision.  And now we find millions of dollars being spent for
studies, without being able to settle on less than eight alternatives.
At this rate the road will fall off the cliff under the combined weight
of all the endless repairs before Last Chance Grade is by passed.

According to the State’s crystal ball it will be sometime at the end of
the third decade of the twenty first century before State graces us with
a fix to the problem.  No doubt that by the time that rolls around the
costs will be even more astronomical, and Cal Trans will have spent many
times more trying to keep the current road open.  You have to ask
yourself, if the government is truly meant to solve all of our problems,
why has it become so difficult for the State of California to solve a
sixty year old problem?