Progress at the Harbor? 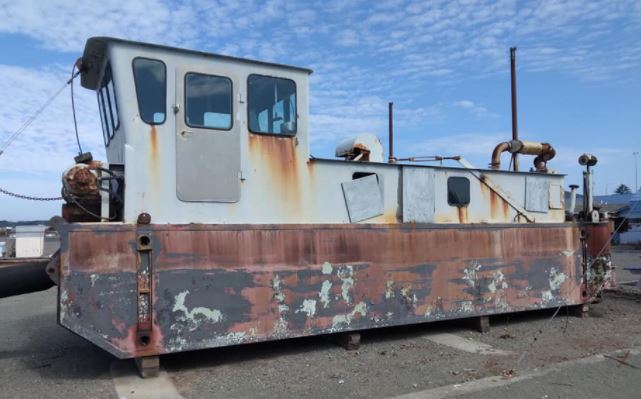 EYE ON DEL NORTE continues to update the public on the progress (or lack of…) on dredging the Crescent City harbor.

The Harbor has not been dredged in a decade and many vessels are unable to ingress or egress the Harbor except during the highest of high tides.

Fashion Blacksmith Vessle repair is one of the Harbor tenants affected by the Harbor Commission not doing its job. The allegation is made the Harbor Commission is dragging its feet in the required removal of accumulated sludge and mud for reasons having to do with the Commission’s ulterior agenda to remove certain tenants it seems unsuitable for Harbor tenancy. These unethical practices have been on-going for many years.

This past Tuesday, the Harbor met in its regularly scheduled meeting for an update on dredging.

There were TWO agendized items:

* update on equipment lease or purchase.*

Status on the Permit process.

Harbor Commission president Brian Stone arbitrarily decided to merge BOTH items together in one discussion.

He then turned the meeting over to Harbormaster Tim Petrick. Mr. Petrick meandered through his report like an 8th grader at Crescent Elk Middle School who didn’t do his homework and stood before the class bluffing it. The Report was unhelpful. The Update was not informative, poorly prepared and devoid of any recommendations to the Commission. The update addressing BOTH Agenda items plethored with several “probablys” and a few “I don’t knows.”

When the public was given the opportunity to ask questions and offered comment, I chimed in. I asked for clarification and specificity on the Report. Harbor president Stone obviously did not appreciate my questioning of the inadequate Report and delivery by Harbormaster Petrick and banged his gavel at three minutes, attempting to cut me off. I promptly reminded Mr. Stone that I have every right to express my opinion is a respectful manner and I reminded Mr. Stone he set the Agenda and I should be afforded a full six minutes for comment and questions on each agendized item. Very telling and biased behavior expressed by Mr. Stone.

In my exchange with Mr. Petrick, instead of respectfully answering my concerns, he inappropriately engaged in a personal attack on me and expressed his opinion of my apparent lack of understanding of this process. Rude!

Then Harbormaster Petrick should enlighten the public. He failed to to do so.

Mr. Petrick’s final comment was “… progress is slow.” I contend there has been no progress on Harbor dredging and the proof is the Harbor has not been dredged in ten years. Mr. Stone condemned himself by proudly stating he’s been on the Commission for six years and seen no progress. I retorted to Mr. Petrick my concerns are not directed at you in a personal manner; I am seeking answers and solutions to this stalled process and I expect the Harbormaster to offer helpful recommendations to kickstart the process of dredging the Harbor. Pathetic and damming!

Mr. Stone ‘s ineffectiveness as a Commissioner should preclude him from further serving. He needs to step down, NOW!

The president of the Harbor Commission was unable to follow his own rules and attempted to cut off my comments because he apparently was trying to save further scrutiny upon Harbormaster Petrick. Unacceptable!

The public has a right to know how this public agency is performing. Sometimes, discourse can be challenging. Mr. Stone does not understand that concept. AND I further remind the public the Board of Supervisors voted to transfer a full 25% of the increase of the County Transient Tax to the Harbor. That total amount last year was $77,000.

Commissioner Wes White. the most senior member of the Commission was uncharactistally quiet during my exchange with president Stone or Harbormaster Petrick. He has participated in and been a part of this ineffective Commission fit many years.

I want to commend Harbor Commissioner Rick Shepherd for expressing his concern nothing has been done to have the Harbor dredged. His expression of frustration reflects mine and the public’s AND bolsters my argument the Harbor is dragging its feet and thus, is hurting the ongoing business practices of its tenants. EYE ON DEL NORTE will continue to monitor the Harbor Commission.

The next Harbor meeting is Tuesday , Sept. 21 at 2pm at the Harbor Office.

2 thoughts on “Progress at the Harbor?”