“YES” ON MEASURE “A” RALLY AT SCHOOL ADMINISTRATION BUILDING 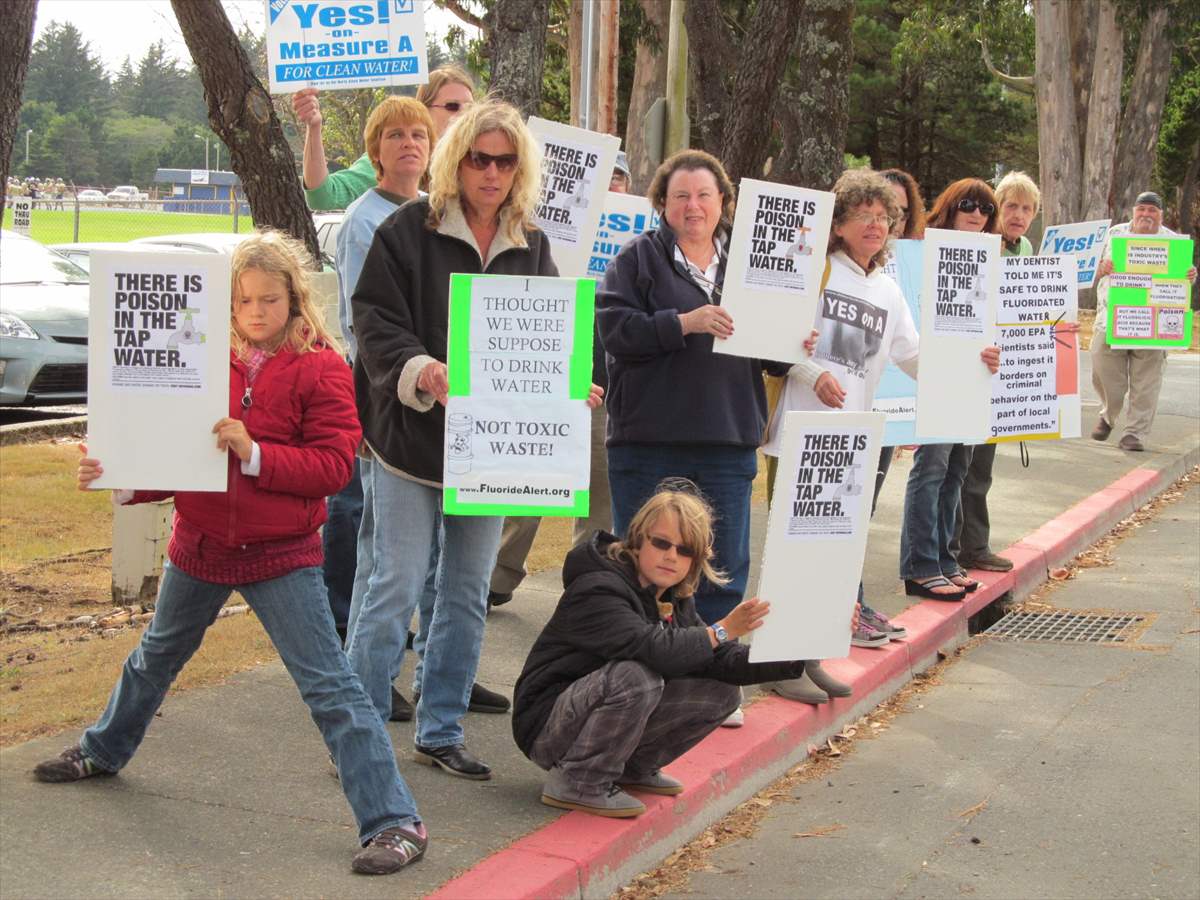 Smiling faces and friendly waves is how passersby were greeted by the group waving signs along Washington Blvd, in front of the Del Norte County school administration office Thursday afternoon September 13, 2012 before the 4:30pm School Board meeting. The group, Crescent City Citizens for Safe Water, Yes on Measure A, held their first rally of the campaign season. Many cars drove by honking and giving a thumbs-up in support of the group’s effort. Measure A is on the ballot again this election season asking for a moratorium on fluoridation until the supplier provides safety assurances. The campaign is heating up for a massive educate-the-public drive ahead of the election in November.

Two year ago, the School Board endorsed opposing Measure A which was a ban on fluoride.  This time around, residents have been e-mailing Board members and speaking at Board meetings during public comment to make sure that the Board gets information on both sides of the issue before taking a vote instead of relying on years of rhetoric.

Signs proclaiming, “There is Poison in Your Tap Water,” and “I thought we were supposed to drink water, NOT TOXIC WASTE,” were a couple of the signs held by protestors. The ballot Measure, which only city voters can vote on, asks for a moratorium. When the city’s supplier, Basic Chemical Solutions, the company that sells the hydrofluosilicic acid (HFSA) complies with providing toxicological reports, a listing of contaminants and proof that their product is safe and effective for all ages, then the moratorium can be lifted.  But, if the voters pass Measure A this time on November 6, 2012, then HFSA will be banned from the tap water.

While most everyone agrees that anyone subjected to paying for or drinking HFSA in their drinking water should have a voice at the ballot box, the city decided many years ago that since city voters were responsible for voting it in; only city voters can vote it out.

There are many issues the public is not aware of.  First, the city changed from sodium fluoride to HFSA in 1980 without notifying the public or putting the issue back on the ballot.  Next, the harm to infants.  Both the CDC and American Dental Association have admitted that infants should avoid formula with fluoridated water.  When the City Council was notified of this through a power point slide show earlier this year and asked to vote in a warning to be included on water bills, the Council in a 4-1 vote decided to table the matter until after the election.  In July 2012, Harvard came out with a study linking lower IQ to HFSA ingestion. This is now the 33rd study linking HFSA to lower IQ’s.  Our children’s tests scores are among the lowest in the State.  School Board members ought to take a serious look at this part of the problem. Other links between HSFA and disease are to thyroid disease, kidney disease, cancer and diabetes.  Plus people in our area who are extremely allergic can suffer from seizures.

Most of the dentist and doctors in our area were ignorant of the chemical used.  Now that they have had two years to be educated, the tide is turning.  No longer considered “safe and effective,” the sheer numbers of people harmed in our area by HFSA ingestion as well as absorption through the skin are mounting.

The idea that a medication that can be added to the water without taking a health history, monitoring the dose or providing a listing of side effects staggers the mind. Ultimately, future discussions are anticipated that will completely ban medications from ever being added to the water.