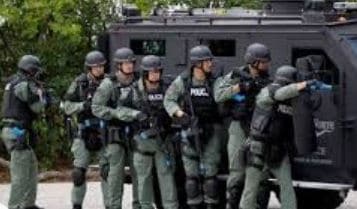 Yet another school shooting has led to demands for the federal government to “Do Something!!!”

The “Liberal” and “Progressive” representatives in control of every branch of our federal government are more than happy to comply by providing additional firearms restrictions. If they had their way, the Democrat Party would ban the sale of all firearms and confiscate every lawfully registered firearm in the United States. In addition to boosting the age to buy firearms from 18 to 21, and tightening background checks, we have a very dangerous proposal; nationwide “Red Flag Laws.”

Nice idea in theory, however it is prone to abuse in practice. In those jurisdictions where these Red Flag laws exist, guns have been confiscated from innocent and sane law-abiding citizens who were not a threat. In fact, one of these cases found their way to the Supreme Court, and both Conservative and Liberal Justices found in favor of the accused and ordered that his firearms be returned.

The problem with such legislation is the potential for abuse. In the Supreme Court Case, the ex-wife of the accused man had made an exaggerated complaint. Though the accused passed a psychiatric exam and jumped through all legal hoops to prove he was not a threat, the firearms had still been confiscated. In that specific jurisdiction, the Red Flag law was enforced if there was any “tangible evidence” that a threat to the community exists. In this specific case, the only tangible evidence was an exaggerated report from a vengeful estranged spouse.

Before we consider other Red Flag law abuse, lets take a look at SWATTing. For those unfamiliar with the term, SWAT refers to Special Weapons And Tactics; which is a heavily armed unit in most police departments dedicated to overcoming the most dangerous fortified offenders. A couple years ago a new lethal teen prank appeared on social media called SWATTing. False reports would be called-in to law enforcement related to an armed suspect committing acts of unspeakable violence. The perpetrator of these fictitious events was portrayed to be so violent and dangerous that only the immediate dispatch of a SWAT Team could overpower the suspect. Innocent people had their doors kicked-in, flash-bangs detonated, and their homes filled with armed police intent on overpowering them. If these victims were lucky, they would be violently wrestled to the ground, hand-cuffed and arrested. If they weren’t lucky, and many were not, they were shot, and some were killed as a result of these twisted pranks. Some of the teens were later arrested, tried, and convicted for their complicity in the resulting homicides. In 2009, Matthew Weigman was sentenced to 11 years in Federal Prison for his part in a SWATTing criminal conspiracy

Fast forward to today. The novelty of SWATTing has worn off, and it is not only twisted teens committing this crime, but anybody harboring a grudge. The extent of SWATTing is no known because the FBI does not track or keep any national statistics of the crime. SWATTing is also an extremely difficult crime to prosecute, and thus has been swept under the rug by Federal and Local authorities in favor of easier pickings. Tim Poole, a conservative talk show host, has been SWATTed in his studio while live on-air eight times during the past six months 2022. He is not alone, as this practice of lethal harassment has become a favorite pastime for the Radical Left. What is there to prevent the new proposed nationwide Red Flag laws from being used as a tool for harassment?

These Red Flag laws, are aimed at persons in legal possession of registered firearms, never charged or convicted of a crime. If they were convicted criminals, under court restraining-order, or prior mental patients then existing background checks would exclude them from firearm purchase and registration.

Could these Red Flag laws be used by criminals? Should a home-invasion robber, rapist, burglar or murderer wish to disarm their victim prior to committing a crime, these new Red Flag laws would be a perfect tool. Simply file a quick anonymous false report and voila, the police take the victim’s most effective means of self-defense away. Just like those involved in SWATing, they can use a “Spoofed” telephone number belonging to a neighbor of the victim in order to lend credibility to their claim.

Will Police take the time to investigate Red Flag charges before confiscating the firearms? Now, while these Red Flag Laws fall under State and Local control, it would depend on protocols set by their State Attorney General, Local District Attorney and relevant law enforcement agencies. Once these Red Flag Laws become Federal, then protocols will be determined by Attorney General Merritt Garland’s Justice Department, and the odds are pretty good that any excuse to confiscate a gun is a good excuse.

Will these Red Flag laws be applied equally? Odds are good that they will only be applied to those in lawful possession of a registered firearm. Criminals who possess stolen firearms, and lacking any record of registration, will be assumed to be unarmed and exempt from these Red Flag Laws. This leads to the most important question, is the average law-abiding Joe and Jane who own firearms more of a threat to the community than criminals and gangsters in possession of unregistered illegal firearms?

Will these new Red Flag laws be used against specific races, religions, and political parties as a form of discrimination or oppression? Once again, considering the rhetoric of this Administration, the odds are very good that these new laws will target political opponents in the furtherance of their purge to consolidate power. The Second Amendment was established to protect the Citizens of the United States against Tyranny. It only makes sense that Tyrants would seek to remove this right in order to protect themselves.