Reflections from the State of Jefferson Declaration Committee 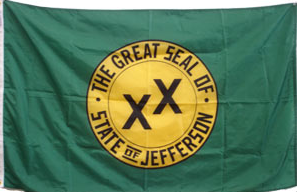 Now that much of the historical information and foundation about the move to create the State of Jefferson has been established and brought to the publics attention it is time for action. As stated in the declaration petitions requested by the Del Norte County Board of Supervisors and signed by a substantial number of residents in each of the 5 districts the action is simple. The declaration for inclusion is a non-partisan declaration. It does not address any of the issues of contention that must be addressed once the outcome of a vote by the board is arrived at. The action is a vote to establish if the people of Del Norte county are in favor of separation from the State of California or not.  The Del Norte County Board of Supervisors will not be making that determination.

Because the history of the State of Jefferson has roots that can be traced back to before the United States Civil War (1861-1865) the flaws of democracy has returned to center stage. Few in this country, this state or this county will disagree that there are disproportionate distributions of population, land, industry, for the equality promised by democracy.  It is the reason the nation chose to become a Federal Constitutional Republic. A nation of laws.  Each state created under this form of government has the ability to modify it’s own constitution to reflect the will of the people living in that state.  The State of California’s constitution, having been developed and perverted by the larger populations, and economic forces now does not reflect the interests of the rural communities.

One of the basic tenets of democracy is to aid in the right of the people for political self-determination. This is the purpose sought by the State of Jefferson.  The goal of the formation of a new and separate state is not dissimilar to that of the original 13 colonies who were being ‘taxed without representation.’  As well pointed out by a recent visitor to Del Norte County,  Fred Kelly Grant made many of us aware of the principle of coordination which is a constitutional protection against under-representation. For all who have issues the desire eagerly supported by the State of Jefferson is that everyone have a voice and everyone be heard.