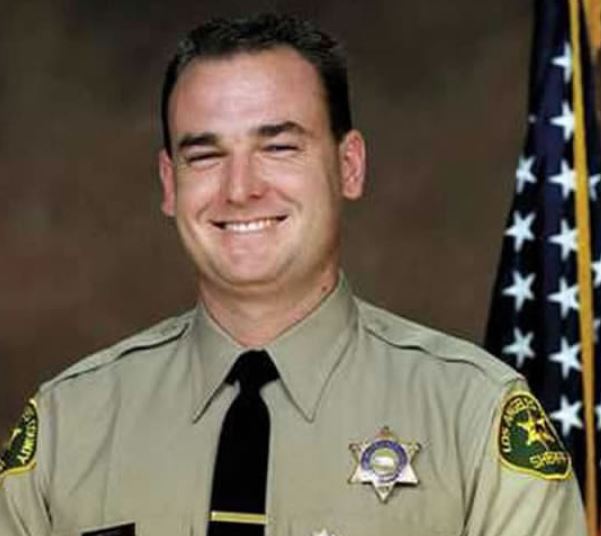 Los Angeles County Sheriff’s Department (LASD) – The March Family of Santa Clarita were dear friends of mine and I pause each year to remember Deputy March. Dave was murdered by a three-times deported, twice convicted illegal alien drug dealer on a dreadful Spring morning, after he pulled over a vehicle in the San Gabriel Valley, in Irwindale, California. The suspect driver vowed to kill a cop that day, shot Dave, the bullet hitting him at the edge of his protective vest, knocking him to the ground. He then shot Deputy March in the head. This assassin who I vowed never to utter his name, fled to Mexico where he hid out in the open for 4 1/2 years while the Mexican government and the Los Angeles County District Attorney squabbled over the Death Penalty. U.S. Marshalls eventually apprehended the “suspect” who pled guilty to Second Degree murder. He sits in a CDCR facility under a Life without possibility of parole sentence. May he NEVER see, smell, taste or experience freedom for the rest of his natural life.

Recruiting top quality law enforcement officers is more than challenging. The job has become impossible to perform. Sadly, standards for hiring the best of the best have declined and we the public are and will continue to pay dearly for this deterioration.

I wonder how Dave would view how some of our public who revile those who enforce the law. It is indeed an upside-down world how a loud, obnoxious minority of malcontents can spew the poison of cop hating. I can only imagine those who hate law enforcement might not embrace the likes of Deputy David William March.

I met Dave in 1995 at his home in Canyon Country, California while he was still in the LASD Academy.After Dave’s murder, I changed and I believe for the better. Illegal aliens were entering the United States and many were not here to embrace America but to destroy her. Many would stand on Santa Clarita street corners seeking day labor and those unscrupulous employers paid no taxes and below minimum wages. Many of these business including fast food franchises, used fraudulent social security numbers to cheat the system. I was and remain outraged by our Government, both Democrat and Republican at the Federal, State, County and City government(s) turning a blind eye and deaf ear to these crimes. I formed a Minuteman chapter in my community and took my case to the Santa Clarita City Council. With the exception of one Councilor, Bob Kellar, the remaining four were deaf, dumb and blind addressing the impact and problems associated with illegal immigration. One councilwoman criss-crossed her arms in a gesture there was nothing she could do and to contact my Congressman. I told her and the other three to resign. ALL politics is LOCAL.

To the hundreds of thousands of families who have suffered loss of a loved one, victim of sexual assault, drunk driving and property crime, my heart goes out to you all. I cannot fathom your pain.

Deputy March’s memory will be remembered in an official annual ceremony of the Temple City Office of the LASD, where Deputy March worked. The two guard homage begins Thursday morning , April 29 at 12:01AM and runs for 24 hours. If you would like to attend the event in Irwindale. Take the 210 freeway to the 605, and exit Live Oak Blvd, head west until the road changes name to Arrow Highway. The site is located 300 yards east of Myrtle Ave.

Dave once said, ” I will always be painfully honest and work as hard as I can and hopefully make a difference in people’s lives.” Those words became the LASD Creed. Deputy March, you have made a huge difference in my life and so many others and for that I am eternally grateful.

You live within me, today.