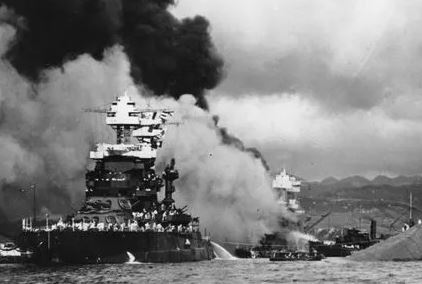 It took “a day of infamy speech” by President Roosevelt to pull us into the war.  The Japanese made a surprise attack on the morning of December 7, 1941 on the US Naval base in Hawaii’s Pearl Harbor on the island of Oahu when hundreds  of their planes  got through virtually undetected and starting shooting and bombing. During the attack nearly 20  Naval vessels including eight battleships were destroyed along with more than 300 aircraft.

Roosevelt’s “Infamy speech” was made before the Joint Session of the US Congress the next day. Our country thought we were still negotiating for peace with the Japanese when the attack occurred. Clearly, we had been deceived since the attack took much planning.

The USS Arizona, which lost 1,177 men is still resting at the bottom of the harbor with most of its crew entombed on board.

In Honolulu, today’s date, came news of 100 soldiers and marines previously unidentified and considered missing in action are now identified and have been put to rest either in their home towns or reinterred in Honolulu. This comes two years after the Defense POW/MIA Accounting Agency dug up nearly 400 sets of remains from a Hawaii cemetery. Because of advances in forensic science, ID’s were possible. In March of this year, the oldest living survivor of the Pearl Harbor attack, Californian Ray Chavez, turned 105. He was aboard a minesweeper, the Condor, when the raid occurred. He did not talk about his experienced for 50 years. For the past five years, he has participated in the remembrance ceremonies held on Oahu.