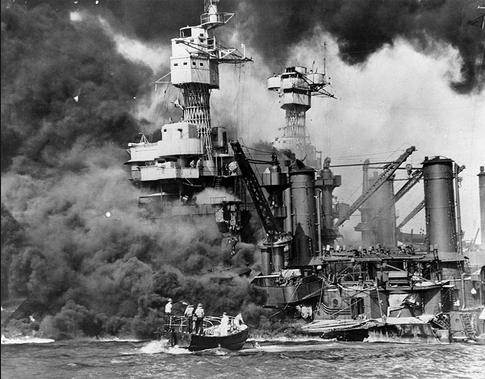 72 years ago, the Imperial Japanese Navy attacked and decimated the ships docked at Pearl Harbor in Oahu, Hawaii. This act pulled the United States into World War II.  It shall forever be remembered as “a day of infamy.”  Or will it?   We don’t talk about Gettysburg, or D Day.  Time fades.  Survivors die.

More than 2400 soldiers, sailors and Marines were killed, almost another 1200 wounded not counting civilians most of them injured by U.S. anti-aircraft artillery shells landing in residential areas.

What started in 1941 as a victory for the Japanese ended almost 4 years later in Hiroshima and Nagasaki when the atomic bomb brought the world into a new era.  Hundreds of thousands of Japanese were killed in seconds. The Japanese military and government brought to their knees by the “sleeping giant.”

President Barack Obama’s Proclamation in remembrance of this day includes:

“We also celebrate those who served and sacrificed on the home front — from families who grew Victory Gardens or donated to the war effort to women who joined the assembly line alongside workers of every background and realized their own power to build a brighter world. Together, our Greatest Generation overcame the Great Depression, and built the largest middle class and strongest economy in history.”

We don’t need another surprise attack by any nation. It’s time to plant “Victory” gardens again, but with a twist.  It needs to be renamed.  It’s time to work together to help rebuild our economy due to a devastating recession.  It’s time to rebuild our middle class by creating industry and jobs.