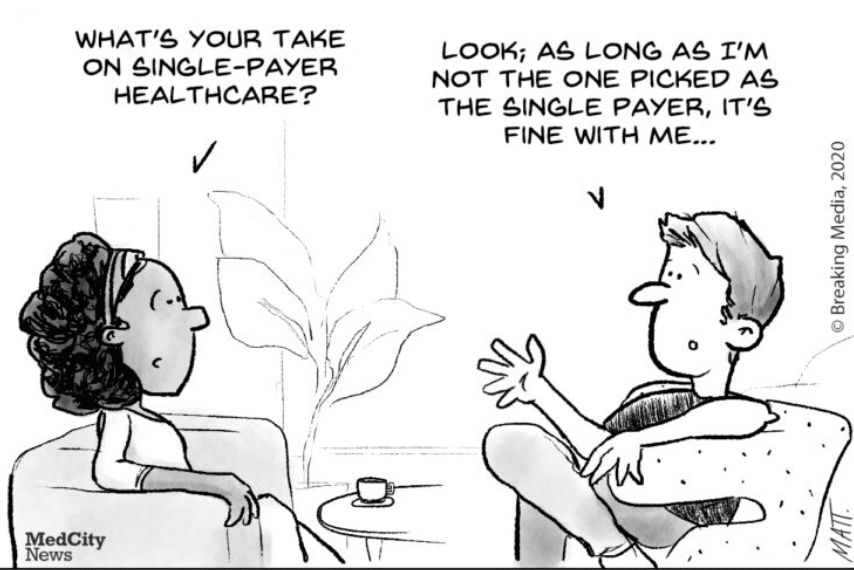 Something extraordinary happened on Monday. At the very last possible moment the Single Payer Healthcare bill was withdrawn because it “didn’t have the votes.” For one day sanity prevailed.

We were all sitting at our desks on the Assembly Floor around 5 PM, waiting for the debate to begin. Then, suddenly, the session was adjourned – the vote cancelled.

January 31 was the deadline to pass bills left over from 2021, so we’ve killed it for the year. For posterity, and to show just how bad AB 1400 was, I’ve *written out the opposition speech I was about to give.

Meanwhile, Newsom addressed his latest scandal. He explained he wore his mask “judiciously” at the football game, only removing it at the very moments he happened to be caught on camera.

The rest of the world is emerging from the madness of mandates. But California continues to deny reality. This is the time to ask your legislator to co-author ACR 46, my resolution to end the emergency.

Finally, thank you for the very kind birthday wishes. There’s a lot of ugliness in politics, but I’m truly blessed to have the support of so many wonderful friends and patriots.

Help me take our fight to Washington

Let me say out loud what everyone here already knows: this bill is an embarrassment.

The fact that it has found its way to the Assembly Floor is a total farce.

The fact that the Democrat Party is threatening to pull endorsements from those who vote against it takes us into the realm of self-parody.

This bill would take all of healthcare, one of the largest sectors of the entire economy – and the most personal one – and put it entirely in the hands of the California State government.

The obvious problem with this is that the California State government is one of the worst-performing institutions on the planet.

The California state government has doubled its budget in the last decade and has nothing to show for it.

The California state government has given us the DMV, which was the national poster child for bureaucratic failure until the EDD claimed that distinction for itself.

The California state government has ushered in the worst poverty and homelessness in the United States, to the point where even Governor Newsom recently remarked that we look like a third world country.

Or if you want to look at healthcare: the California state government runs a MediCal system that has added $70 billion in 10 years without any evidence of improved patient outcomes.

Imagine if we did things differently. Imagine how much good we could do if we used our heads and tried to find solutions. If we pursued ideas that have been proven to work.

But there is no appetite for that sort of thing here.

In today’s proceedings, like never before, we bear witness to the unholy marriage of wokeness and corruption that is ruining the greatest state in the union.