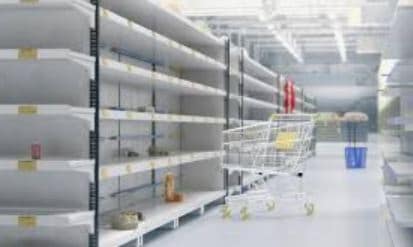 If you are just waking-up to the grave consequences of our Country’s financial situation, STOCK-UP on food NOW!

At present prices, the least expensive option for a relatively complete basic emergency supply of food is rice and beans. At today’s prices at Walmart, a 20 pound bag of rice can be had for under $11, and a 20 pound bag of pinto beans for under $15. The daily survival ration per person consists of one pound of rice and ½ pound of beans. This ration is based on minimum requirements of calories and protein for a sedentary lifestyle, such as a lock-down with little exercise or work. For a strenuous lifestyle of manual labor, then double the ration and increase the ratio of beans to rice one to one in order to replace worn muscle. A one year supply for one person would then require 365 pounds of rice and 182.5 pounds of beans. For the sake of simplicity, I will round these figures off to 380 lbs of rice and 200 lbs of beans; and we can splurge with an extra few ounces on holidays and birthdays.

So, at today’s prices, you can get a year’s basic nutritional calories and protein survival ration for $359.00! That comes to $21.33 per month for each of member of your family.

I will emphasize that this is a BASIC SURVIVAL RATION. In 3rd World Countries, people either grow additional food, forage for natural plants, or hunt and fish in order to supplement their diets. Once hunger sets in, the “Entitled” criminals will raid home gardens; and some might even do home-invasion robberies to stay fed. With many thousands of people experiencing famine, expect elk, deer, bear, livestock and horses to disappear during the first year. Wild forage foods will also be carelessly harvested to extinction by ignorant and desperate people. If you can protect what you have, you can at least survive on beans and rice.

Will you enjoy this diet? You would enjoy it more than starving. It beats competing with others for bitter herbs and road-kill scraped from the pavement. It also beats the moral degradation of criminal predation on innocent neighbors.

Will it get that bad?

You better get your beans and rice soon. Beans have already increased in price, and Rice is about to skyrocket. China is the world’s biggest producer of Rice; but they are not exporting any of it. Instead, China has become the largest importer of the world’s Rice. India has banned the export of any food this year in order to feed its own people. Pakistan and Sri Lanka are on the brink of total collapse, and will need everything they have to survive. Thailand and the rest of Southeast Asia are positioning to boost Rice prices, IF this year’s monsoons provide adequate water to grow any. The same is true throughout the world. What about the USA? Most of our rice comes from California, and because of the drought rice fields will not receive any water. That’s right, no Rice growing or harvest for the USA this year!

So, even if you are on a strict budget, you soon will be ass-out of options. In the very near future there will be no such thing as cheap food. So get your emergency food rations while you still can.

How long should you prepare for? Let’s consider our situation. We have an undeclared proxy-war with Russia in Ukraine that is removing most of the world’s wheat from the markets. We have China cutting off exports to the United States due to economic warfare. We have grain crops that are failing worldwide due to droughts, soaring fuel costs and lack of fertilizer. We have a worldwide shortage of gasoline, diesel, natural gas, propane and electricity with subsequent runaway inflation of fuel prices. We have a government that has declared an energy emergency, sold our strategic energy reserves to other countries, and essentially banned domestic fuel production for its citizens. Fuel refinery output for the East Coast has dropped by 50% since 2019. We have a supply-line collapse that prevents the repair of farm and transportation equipment for a lack of parts. Small farms and ranchers are going bankrupt, which is real good news for Bill Gates who is the largest agricultural land monopolist in the USA; and is always looking for bargains. We have small trucking companies going bankrupt and trucks sitting idle for a lack of fuel. We have a rash of fires and explosions at feed, fuel and food processing facilities throughout the United States, many blamed on arson and sabotage. We have Homeland Security releasing a Terrorism Alert Bulletin warning of impending civil unrest this summer. We have well over a million “Undocumented Citizens” illegally crossing the Southern Border this year, and a large caravan of over 12,000, all hungry for the American Dream and their entitled share of food.

How long will the food shortage last? A year? Two years? More?

Here’s my recommendation; consider your food storage to be a bridge to self-sufficiency. How long will it take you to become food independent? How long before you can grow enough food to maintain your family? How long to develop skills necessary in the coming black market economy til you can provide for your family?

This is not the end of the World. America has been overthrown by a Corporate Communist elite. Nothing new. It has happened in many other countries, and now it has happened here. The January 6th Show Trials that monopolize our airwaves are the same as those used by Stalin, Hitler and Mao. In order to shift blame from government policies that sabotage and loot the economy, they must create a Booger-man, and there is no better target than the political opposition. The government will imprison their opposition in extermination and slave labor camps, just like it has traditionally been done time and again, and life will go on for those ignorant, weak-willed and brainwashed bastards who comply and obey.

Best case scenario, we will go the way of Venezuela. Within a year or two the US Dollar will totally collapse through hyperinflation and become worthless. There will be an initial period of famine, where people’s pets and public zoo animals find their way into cooking pots, and garbage trucks are robbed for tin can scrapings. People will be forced to work for their “Universal Basic Income;” but they will be paid in worthless dollars and barely survive. Most folk will have a second job in the secret underground illegal Black Market Economy; growing food, scrounging used parts, scavenging trash for rags and recyclables, providing services for rich patrons, or perpetrating crimes in order to support their families. Crime will take over the streets. Organized Crime Cartels and Government will both prey upon the ordinary citizen. The US Government has already formed an alliance with the Border Cartels for drug and human trafficking, and this “understanding” will network throughout America. Police, as we know them today, will be replaced with enforcers financed and controlled by rich industrial oligarchs and government tyrants. After ten years, we will be like every other communist shit-hole, with a post-brainwashed population, purged of any renegade free thinkers, and resigned to a life of slavery and poverty, and a disparity of wealth far exceeding that which existed before the “People’s Revolution.”

The “News” isn’t covering any of this? Here’s more: There is a worldwide concrete shortage has closed road construction and repairs in Utah and a majority of construction projects elsewhere. In some rural jurisdictions, police are ordered not to respond to anything but life threatening incidents because of fuel shortages and budget constraints; while other rural departments are limited to 25 miles per patrol shift. Crops are not being planted because farmers cannot risk the commitment to “futures contracts” without a projected estimate of fuel and fertilizer costs. Walmart and Target just had the worst decline in stocks since the 1989 Black Friday Crash; with a rash of store closures and employee layoffs pending. Trucks of entire small trucking firms sit idle because truckers walked off the job. Understaffed medical personnel are walking off the job without replacements, many hospitals are only 1/3 staffed. Farmer John’s food processing plant closed last week due to California’s high taxes and is laying-off thousands of workers. Ford and Mercedes allows new car and truck buyers to take delivery only after signing a warranty waiver because they have cannot guarantee availability of repair parts. Recalled cars and trucks are being crushed due to a lack of parts to fix them. Medications are in such short supply that hospitals are rationing them. Because of a medical dye shortage, heart surgeries are being indefinitely postponed. Pharmacies are closing because of a shortage of pharmacists. Fires and explosions are happening at factories and processing plants on daily basis.

Department of Homeland Security’s recent Terrorism Bulletin spoke of violent “Events” expected to happen in coming weeks. Are these already happening? Have they been happening for a month or more without being reported by mainstream media?

Was the recent explosion in Freeport Texas LNG facility that processes 20% of the nation’s Natural Gas Exports an act of terrorism? The bad news is that this LNG plant will be offline for at least three weeks. The good news is that all the gas would be shipped to other countries; so we in the United States wouldn’t get any.

It also looks like China is no longer delivering a majority of its exports. If this is so, we are in a world of hurt. Fed Secretary Janet Yellen just announced that we are in for inflation and perhaps stagflation for up to ten years. Meanwhile, our government still tells us inflation is “Transient” and to buy and drive expensive electric cars that can’t even leave the lot until they have missing computer chips installed, and we are told to buy expensive “green energy” that largely does not exist because we have no domestic solar production capacity. Let them eat cake! And, the cherry atop that cake is Russian troops, aircraft and military vessels due to arrive in Nicaragua for a “Humanitarian Mission” during the second half of 2022. Venezuela has also established an alliance with Iran and will soon be hosting Iranian Military. Cuba will once again be stockpiling Russian military equipment just a stones-throw away from Florida. According to polls, over 50% of the American population expects a Civil War. We are already in a proxy war with one Nuclear Power, and an economic war with another Nuclear Power.

For those interested in following the rapid decline of the US economy, I have two sources for you to consider. One of my favorite reporters is Steve Poplar at “Poplar Preparedness.” His reports are vetted for accuracy, and often tend to scoop mainstream media who’s reports either arrive later or totally ignore important news altogether. Much of his emphasis has focused on the rash of fires and explosions at feed, fuel and food processing facilities that appear linked to acts of either sabotage or terrorism. For the past couple of weeks, “Southern Prepper One” has been broadcasting his “Boots on the Ground” series, where local reports throughout the world are vetted and reported. It appears that we will not only be facing supply shortages, but a total breakdown in transportation infrastructure and emergency services.

We can do little about the state of the world. We are facing what old-time New England whalers called a “Nantucket Sleigh-ride.” Once a whale was harpooned, and the line tied to their boat, the boat would go where the whale went; even if it were to the bottom of the ocean. All we can do is prepare ourselves and our families to weather the coming storm.