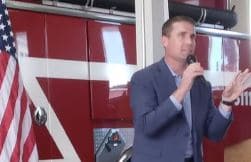 State Senator Mike McGuire (D-CA-2) was in Cresecent City, today to welcome new Fire and Rescue Chief Kevin Carey to his new position. While here, he updated those invited guests in the audience at the Fire Station on a number of subjects.

The Senator exudes a level of Kennedy-esq charisma and charm not often seen in our neck of the District.

It takes a special effort not to be impressed with his smooth words rather than his actions/ results.

* McGuire announced per pupil spending has grown from 50th in the country to top ten of all States since he took office in 2015. His Office is spearheading a $9 billion block grant for K-12 schools. Here’s SOME of the breakdown:

* $900 million to expand Vocational Education. McGuire wisely stated, “Higher Education is not for everyone.” Very true.

* Last Chance Grade has narrowed down road selection to TWO choices: The tunnel or rebuilding the existing route. McGuire has stated he expects two way traffic to begin this Fall.

* McGuire has doubled down on how to address those who purport to be homeless AND, in the words of the Senator, “…the appalling, unacceptable and the need to do more” conditions which plague Crescent City and Del Norte County.

* $14 billion housing for homeless with three years of services for drug, alcohol and mental health disability.

I presume it’s prudent to ask who pays for these services in year four to infinity because and the Senator so cogently stated, ” the problem of homelessness did not start overnight and will not end overnight” if all this funding actually come to fruition.

* McGuire also spoke in support of a Crisis a Residential Center in Del Norte County.

And the good Senator spoke in support of the Care Court and SB1338 which the Board of Supervisors has already drafted a letter of opposition and will discuss in detail at its Tuesday June 28 meeting.

What was noticeable in omission of the Senator’s remarks was absolutely no recognition or regard for our beleaguered Middle Class. Saddled with oppressive taxes, incredibly burden-some debt and absolute runaway inflation including the highest cost for fuel in the 48 contiguous States, the Middle Class is fleeing the State.

It is my intent to review in the coming weeks the Senator’s remarks, comments and concerns.