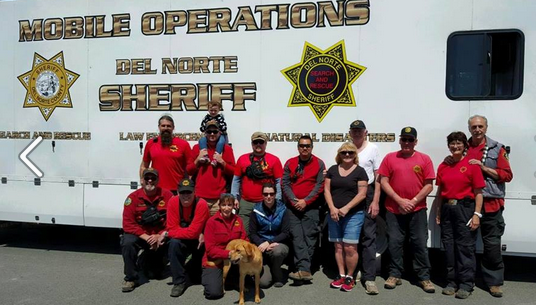 Saturday, May 16, 2015, the Del Norte County Sheriff’s Office Search and Rescue (SAR) crew at Kid’s Town. At first, seeing the large Mobile Command Unit at a park may have seemed a little concerning but rest assured, this news is all good.

Saturday’s function was a training exercise designed to implement the early stages of Project Lifesaver. The scenario was as follows:

At about 9am today, SAR members were dispatched to the area of Kid’s Town to meet with a frantic care giver wanting to report an individual as missing. She told responding units that she provides care for an elderly man suffering from Dementia. He had been missing for about 45 minutes.

The only good news was that the missing man was equipped with a bracelet from Project Lifesaver.

Sergeant Terry McNamara and Tom Cabrera operated the Incident Command Post/Mobile Command Unit and SAR members were divided into teams. Those teams began searching by foot with devices designed to locate the transmitter attached to the bracelet of the missing man.

About twenty minutes into the search, another individual was reported as missing. This new report was completely unrelated to the first report and this missing person was last seen on the other side of town. She was also wearing a bracelet from Project Lifesaver.

Del Norte SAR members were then tasked with trying to locate two “at-risk” adults simultaneously. This was a test of resources, including manpower, as every passing moment lessoned the likelihood of a positive outcome.

Within two hours from the beginning of this scenario both missing people were located. They had both traveled quite far from the last place they were seen.

Del Norte SAR was able to locate the missing people with the assistance of receivers programmed to detect the frequencies being transmitted from the Project Lifesaver bracelets.

The purpose was to test the application of Project Lifesaver’s technology and our local response while utilizing that application. As your Sheriff, I was very impressed and hope to offer this program to our community.

As always, I was extremely pleased with the women and men that make up our Del Norte Search and Rescue team. Their dedication is second to none and what’s most incredible is that they are made up entirely of a volunteer staff.

They are truly committed to saving lives.

One thought on “Sheriff States, “Committed to Saving Lives””