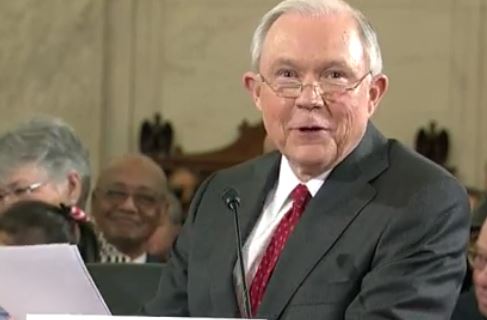 You can watch 10 hours of video footage from the Sessions confirmation hearing held Tuesday, January 10th; or you can spend 10 hours researching what Sessions is all about on the internet… or you can do both.

Being born and raised in Southern California is NOT the same as being born and raised in Southern Alabama. While So. Californian’s have long held the impression by outsiders as being from another planet, or that place of the “fruits and nuts,” it has not been largely recognized as racially prejudiced or bigoted by comparison to the southern states of the United States.  Now compare that to someone named JEFFERSON BEAUREGARD SESSIONS. Who else from the South is connected to the name Jefferson?

While some might think Thomas Jefferson, one of the founders of our nation and principal author of the Declaration of Independence (who died before the civil war).  Others might think Jefferson Davis, the president of the Confederate States of America for the duration of the American Civil War.  It’s hard to impossible to get away from the impression that anyone that is white and raised in So. Alabama might love the NAACP or ACLU or hate the KKK.

Speaking of the Klu Klux Klan, (think white men running around in white hoods and robes carrying guns, burning crosses and killing black men… or just watch the movie, Brother, Where Art Thou), Sessions was credited with assisting in the ultimate bankrupting of the KKK  IN ALABAMA and it boils down to the Hays case.

A young black man, Michael Donald, was abducted and lynched in 1981.  The suspect(s) were members of the KKK, Henry Hays and others.  At the time, Jefferson Session was state attorney general for Alabama. Hays was found guilty and sentenced to death.  Sessions upheld the death penalty. Hays was executed.

Where did the term “racist” connected to Sessions begin?  From that era and from someone that worked under him named, Thomas Figures.  Figures was a black attorney who died in 2015.  He was actually the first black man to serve as a federal prosecutor in Mobile, Alabama and worked with Sessions for five years.

Contrary to the portrayal of Sessions by Figures as being a “racist” is Chris Galanos, the former Mobile, Alabama district attorney who secured the death penalty conviction for Hays.  Galanos worked with Sessions during the 1980’s and 1990’s and does not believe Sessions is a racist.

Jeff Sessions is 70 years old, Republican and Methodist.  Married with 3 children; all of his children are married which have so far produced 10 grandchildren. One son-in-law is Asian. So, four of his grandchildren are bi-racial.

One thought on “Should Jeff Session Become US Attorney General?”