Sick of career politicians? Sick of the double standard by Democrats? 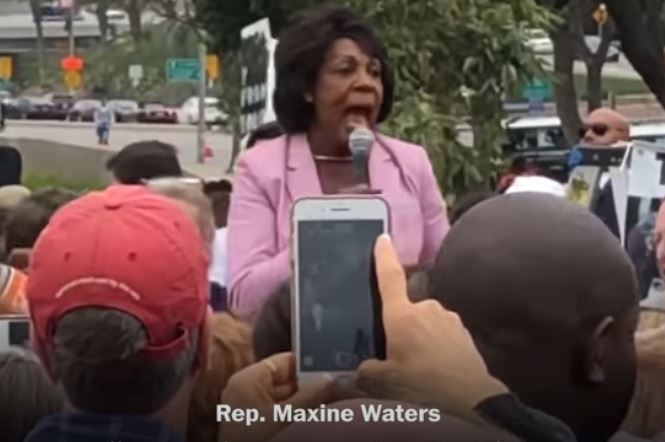 When you think of Nancy Pelosi being in politics the last 34 years and second in line to the becoming the US President, how does that make you feel? Remember her ripping up Trump’s speech? No class. Too much power. Net worth according to scholarlyoa,com AS OF JANUARY 2020 about $140 million.

Now let’s take Maxine Waters (D. CA). On June 25, 2018 she appeared all over the news in her remarks to her supporters to harass anyone in Trump’s administration ” …”if you see anybody in a department store, in a restaurant at a gasoline station, you get out and you create a crowd, and you push back on them and you tell them they’re not welcome…” Why wasn’t she charged with inciting violence? (By the way, she’s been in politics for 30 years. She and second husband live in a palatial mansion worth between $1-4+ million depending on the day and who you talk to.)

Wait for it: Read what happened when someone switched the narrative on Twitter.

Twitter user @CuomoWatch took a portion of the congresswoman’s speech, but altered it slightly to target the Cuomo administration instead of Trump’s Cabinet.

“If you see anybody from the Cuomo Administration in a restaurant, in a department store, at a gasoline station, you get out and you create a crowd. And you push back on them. And you tell them they’re not welcome anymore, anywhere,” the now-viral tweet said.

Democrats, who are obviously not familiar with Waters’ tempestuous tirade, immediately condemned the threatening words, likely assuming the menacing comments were made by Republicans or Trump supporters.

New York Lt. Gov. Kathy Hochul (D) fell for the fake quote, “This is encouraging violence against public officials – plain & simple. Absolutely disgusting. No tolerance for this. Haven’t we learned the lessons from Washington D.C. just weeks ago?”

Former Pete Buttigieg adviser Lis Smith wrote, “Way way way over the line. Especially in light of what happened at the Capitol on Jan 6.”

Democratic New York City Councilwoman Debi Rose reacted by saying, “Really? Did we not learn anything from the Capitol insurrection? We must condemn violence and harassment in any form. #StopTheViolence #MobMentality.”

Democratic City Council Member Keith Powers said, “There are plenty of strong opinions and online angst these days, but there is no place for inciting violence or threatening people. This tweet should be removed ASAP. Full stop.”

Democratic Senator for the 36th District of the New York Senate Jamaal T. Bailey tweeted, “This is more than tonedeaf, especially considering what’s happened in recent days. This is unacceptable and ridiculous. Read the room.”

Democratic member of the New York State Assembly Daniel Rosenthal said, “This is dangerous and unacceptable, especially after what happened in DC. Encouraging this kind of violence is unacceptable.”

Democratic County Executive of Suffolk County Steve Bellone declared, “Democrats and Republicans must denounce this threat of violence against our fellow New Yorkers. After the Capitol riots, I call on @Twitter to ban this account immediately.”

Democratic County Executive of Nassau County Laura Curran was also fooled by the fake quote, “No matter your political party or beliefs, this is completely unacceptable. Nassau County has zero tolerance for hatred and inciting violence.”

Democratic Speaker of the New York State Assembly Carl E. Heastie wrote, “This is appalling and dangerous. Encouraging violence must never be tolerated. Shame on whoever is behind this kind of garbage.”

Democratic Assembly Member for the 42nd District of the New York State Assembly Rodneyse Bichotte was duped, “Threatening government officials & their staff is a crime for which there is a ZERO tolerance policy in Brooklyn & anywhere else. I condemn this tweet & the violence it incites, especially following the insurrection we just experienced at the capitol.”

Democratic Ulster County Executive Pat Ryan wrote on Twitter, “This kind of dangerous rhetoric must be called out and condemned by all. Or else we risk repeating the horrendous events of Jan 6th. As leaders, especially in a time of such great challenge, it’s incumbent on all of us to appeal to the ‘better angels of our nature.”

Democratic member of the New York State Senate Todd Kaminsky said, “Completely unacceptable. Haven’t we learned the hard lesson that incitements to violence like this actually result in violence? There is no room for this in our discourse. None.”

Luis A. Miranda, Jr. said, “You don’t like the Governor, you vote him out. After the terrorist attack on our Capitol, threats, of any kind, especially as the right is targeting state capitals, are dangerous. And to target staff? Not cool.”

Democratic Speaker of the New York City Council Corey Johnson stated, “The terrifying events of the last month have shown us more clearly than ever that words have consequences. This sort of targeting and incitement is simply wrong, and totally unacceptable.”

Democrats finally condemn Maxine Waters’ dangerous rhetoric, two years later, and only after they thought it was a Republican saying it.

9 thoughts on “Sick of career politicians? Sick of the double standard by Democrats?”

Leave a Reply to The Interrupting Cow Cancel reply