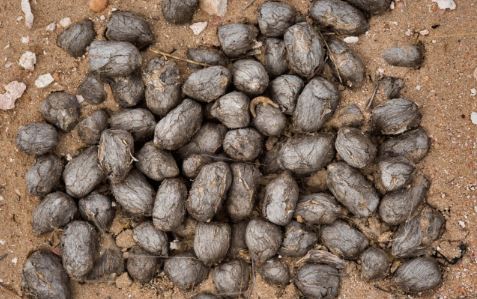 This morning at the Daily Town Hall Meeting that starts at 6 am in Fisherman’s Restaurant, regular attendee, Hank, told the story of British soldiers dying from dysentery during World War II.  Take a look at the picture to the left.  Looks like briquettes, doesn’t it?  It’s not.  It’s camel dung and during the North Africa campaign, soldiers were dying left and right due to dysentery.   When they asked the local Arabs what to do to stop or cure the dysentery, they learned that the locals ate camel dung.  The only thing is that it had to be eaten warm and fresh and by the next day, they felt right as rain (an expression probably invented by an Englishman because rain is a normal fact of life).

That was the first story involving SH* T.  The next story was the origin of the word SH*T.  Hank said it stands for the acronym Store High In Transit.  The story went like this.  SH*T was collected and put in the bottom of ships to be used as ballast but it smelled so bad that sailors couldn’t take it. So, they loaded it on board up high so it didn’t smell so bad. Since I’m very gullible I thought it best to fact check Hanks stories.

Guess what?  He’s right on the first story with one major difference.

First off, it was Nazi soldiers dying of dysentery not British soldiers.  The Nazi’s brought in their doctors and scientists and discovered the secret ingredient in camel dung is called Bacillus subtilis – a bacterial organism with super-strength that eats any other bacteria or virus that gets in its way, particularly any of the pathogenic variety.  Eventually they made cultures and put it in poo soup to feed their troops.  Later they dried it and put it in capsules.  This is the honest to God truth.

The second story is not true.  The etymology of the word SH*T comes from Old English, the verb meaning to defecate.  For centuries it was considered a bad word, taboo and vulgar.  It was even omitted in some Webster’s dictionaries until 1970. These days it’s used in everyday language as we analyze something as being dubious, “No SH*T;” disbelieving, “BULLSH*T,” or depending upon the topic, either funny or serious, “Really I’m not SHI*TTING you.”

Other topies of discussion, Shingles.  A virus, a very painful virus that attacks the nerve endings by the skin.  I’ve only known two people locally that suffered with shingles.  There are shots and steroids like prednisone that help, but what is questionable is the statement on a credible website that states 1 in 3 people in America will get shingles.  Local amateur mycologist, Jaime Yarbrough, was told by his physician that only 13% of the people get shingles so he didn’t bother with the shot. Here’s the serious part though.  Shingles can cause a rash which can be infectitious. Not only that, but it can affect the face the eyes, mouth and ears. It’s akin to chickenpox.  If it affects the eyes, the virus invades an ophthalmic nerve and causes painful eye inflammation and temporary or permanent loss of vision can result. This is not a virus to be trifled with.

Which brings me to the last topic.  Lion’s Mane mushrooms.

Mycology is the study of fungi. Lion’s Mane is most commonly found on dead and decaying hardwood logs, most often in the fall throughout the Pacific North America. Unless you are allergic to mushrooms, ingesting Lion’s Mane is easy and has a crab or lobster-like taste when cooked. Additionally, they can be enjoyed raw, dried or steeped as a tea. Their extracts often used in over-the-counter health supplements.

I found nine health benefits to Lion’s Mane mushrooms. Disclaimer….keep in mind that studies on animals such as rodents or in test tubes may be successful, but either human studies have not been done, or not sufficiently tested. However, if you search the web, you can read testimonials of individual people’s results including help with shingles.

One thought on “Silly and Serious Things”