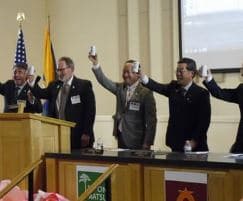 Last Night’s Special Meeting of the Crescent City Council was apparently necessary to sign contracts for the Sister City Agreement with Rikunzentakata, Japan.

Unfortunately, I missed the Meeting but after communications with Mayor Jason Greenough and City Manager Eric Wier, I learned the Council voted 4-0 to approve a $10,000 allocation of City funds to build a mural and memorial recognition of the Sister City Agreement. The City had previously applied for and been awarded a $5 million grant to beautify our Parks. The Mural will satisfy Grant requirements and be erected near the corner of Howe Drive near Stamps Way.

Why was it necessary for the City to budget an additional $12,000?

There are those who fervently and passionately see the value of this program. I do NOT share that point of view..

But at the risk of being Crescent City’s premier iconoclast, I do not see the value of this edifice burdening CITY TAXPAYERS.

What is missing from this equation is a genuine effort by those who support this expense; to raise the funds INDEPENDENTLY, not unlike the iconic Point of Honor.

It would be an honor to support this recognition at P R I V A T E expense rather than burdening the modest and very poor community under the guise of a frivolous stroke of faux City pride.

I believe in and support of Cultural Beautification but not at the expense of deteriorating streets and Public Works in the City of Crescent City.

Attached are some of the absolutely atrocious pot-holed streets which proliferate like the uncontrolled weeds growing from the curbs, gutters and sidewalks all about the City.

I wonder aloud if the City will squander the remaining $2,000 of this budgeted Sister City nonsense and redirect the funds to start repairing the flawed roads in our beautiful City.