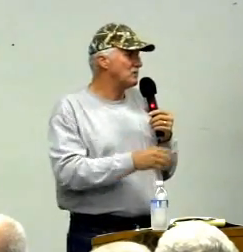 There could be lower gas prices, because there would be lower gas taxes.  Almost 72 cents of every gallon is added on as a gas tax in California between Federal and State taxes.   We’re currently at $3.87/gallon.  We could be at $3.34 a gallon like Brookings, Oregon.

Lower property taxes, lower corporate taxes, maybe even eliminate the $800 annual corporate tax charged each and every year whether or not a corporation makes a profit, lower personal income tax with the elimination of wasteful spending on a multitude of government agencies which would become unnecessary in the new State of Jefferson.

From their website: www.delnotejefferson.net  “Local control of taxation and the allocation of collected funds stand out among the many strong economic justifications for forming the State of Jefferson”.

The California Coastal Commission would cease to exist in the State of Jefferson.

All well and good.  However, what’s to be done with the good old boy network?  How could the SOJ eliminate that?

Just because we might break away from some of the double crossing due to taxation without representation from a state lingering on the brink of bankruptcy, we still would have all the same problems.  We have our own local taxation without representation. The city raises rates and the county folks affected by those rates don’t get to vote on who sits on the city council.

Yes, we need industry in our town, and jobs, more tourists and a better road or bridge driving south towards Eureka around Last Chance Grade.

But, if you continue to have people in control that don’t want to create jobs where does that leave us?  It leaves us with too much government and same old, same old.

Mark Baird, State Coordinator for the State of Jefferson will be speaking at a Town Hall meeting on Monday, February 3rd at the Del Norte County Fairgrounds. The local area coordinator, Aaron Funk, took time out of his hectic schedule to speak with me about some of my concerns.

This is what I understood from our conversation.

Jobs, industry – Businesses can be enticed here with tax incentives as the SOJ rather than chasing them out of the State of California with mountains of red tape, rules and regulations and taxes.

By having new blood, some think it will gradually get rid of the old school that has been eroding this town for decades through cronyism, glad handing and back slapping; and the flip side to that, black balling and black listing those that don’t goose step to their beat. Certainly chopping off the almost incestuous relationship with Sacramento and some of our politicians will make a difference  But let’s not be so naïve to think that a new state will erase corruption.  Corruption has been around since the garden.  The one I’m talking about is the original garden, Garden of Eden.

Perhaps as the SOJ, we can more closely monitor voting and hope to put into place safeguards so that the sanctity of the vote is intact instead of wondering who’s votes are not being counted this time around such as in the Prop 218 water rate protest.  More information on that in the very near future.  Prop 218 and Prop 13 – will they be part of the new SOJ?  I should hope so.

Industry; mining the natural resources.  Didn’t logging go the way of extinct animals because those in the industry did not plan sustainability? Can we get back into logging responsibly and selectively in the SOJ?  Can we continue our fishing without a successor to the California Coastal Commission eliminating areas like our current Marine Life Protection Act which currently limits 13% of the state waters between Point Arena and the Oregon Border.

Don’t get me wrong.  I do not support the unwieldy California Coast Commission and would like to see most of their power cut off at the knees. I favor jobs and industry but worry about those currently in power and what they might do next having witnessed how callous they have been in the past 6 years concerning the public and handling of public money.

Can we mine gold, nickel, and chromium  without creating a huge pollution problem?  I had no idea our area was so rich with these precious metals and minerals.  If other areas of the world can mine without disturbing the environment too much, so can we.  Maybe not as the State of California, but perhaps as the State of Jefferson.

This break-away plan is not new.  They almost accomplished a new state just before Pearl Harbor in 1941.

Right now, an open mind and a lot of questions are in order. After listening to Mark Baird on February 3rd, perhaps they’ll be ready for the next steps.

The next steps.  The Del Norte County Board of Supervisors have already been asked to put this issue on their agenda. If the BOS approved the Declaration then the process would have overcome a major hurdle. BOS Chairman, Mike Sullivan, asked them to bring in 100 signatures and he would put it on the agenda.  More than that was submitted to Sullivan.  However, not true to his word, Sullivan decided it was not going on the agenda.

The town hall meeting featuring Mark Baird is scheduled for February 3rd, Monday, at the Fairgrounds.  This would allow folks the opportunity to evaluate the plan for the proposed State of Jefferson and be ready to attend the next Board of Supervisors meeting.