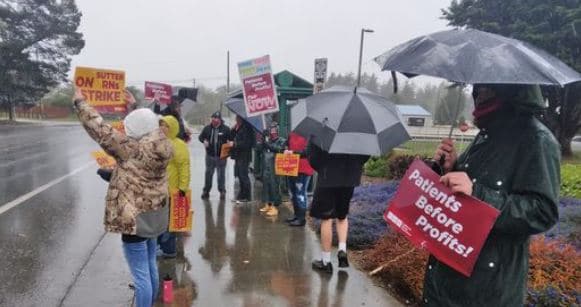 It seems that local nurses employed by Sutter Health are an unhappy
lot.  They expressed this dissatisfaction by resorting to an appearance
on the sidewalk in front of the local hospital waving signs expressing
their dismay.  This brave group facing the cold and rainy weather common
in Del Norte County, has been in negotiations with Sutter Management for
ten months and have yet to reach an agreement.  The concerns that appear
to be at the center of disagreement are safe staffing levels, workplace
violence, and pandemic readiness.  What was interesting about this
particular strike was, no mention of increased compensation, the most
often issue that striking workers complain about.

We have regularly been apprised of the growing need for more
professionals in medical fields for years, and one must assume that this
has become an issue at the local hospital.  The past two years of Covid
hysteria have no doubt been a significant factor in the loss of appetite
for young people to enter the field of healthcare.  Those that are
striking have not made it clear what would change in their circumstances
if Sutter Health could not improve staffing levels nor how to affect any
change in Sutter’s efforts to increase said staff.  Clearly  if the
problem lies solely with Sutter Health, striking nurses would have some
idea what changes to propose, other than insist that increased staffing
which may not be possible in today’s medical world.

Workplace violence and staff safety should be of major concern in a
hospital anywhere.  Short fuses and personal health issues are an ugly
combination to contend with in a hospital setting.  The medical
community as a whole has lost much of the trust of many in the community
over the past two years of Covid hysteria, something that will take time
to reestablish.  People have become less trusting of the medical
establishment having their best health issues in mind and
correspondingly are often not on their best behavior while being
treated.  As with public interactions with police, security in the
workplace can only get you so far.  Again what solutions have the nurses
offered that would improve that scenario?  Simply hiring in both cases
does not assure a better situation in the workplace.

Finally, the call for personal protective equipment stock piles to
comply with a State law, really?  Was there any noticeable shortages
over the past two years of PPE?  Would a three month stock pile have
changed anything going forward?  This cannot be a major issue for nurses
in this negotiation.  If State law compels the Hospital to have such
stocks in hand, why is this even an issue?

Clearly there are issues that are not for public consumption in this
congress of conflicting sides.  The fact that wages are not an issue
becomes rather peculiar in the light of a strike and the hospital’s
reaction to it.  A lock out does not seem to indicate that a shortage of
nurses exist, at least as it has to do with administration and their
ability to assemble contracted replacement workers.  One can only
speculate what obstructs both side from coming to an agreement.  Staff
shortages seem questionable, lack of work place security maybe, PPE
shortages Wow, that’s a reach.  What ever the problems that remain from
getting both sides to an agreement remain to be seen.  The issues that
have been publicized seem to be easily solved to both sides
satisfaction.  So what are the real issues that would cause a group of
nurses standing out in the rain to protest?

One thought on “Strike At Sutter Health?”