Students Walk Out to Bring Attention to PRO-LIFE 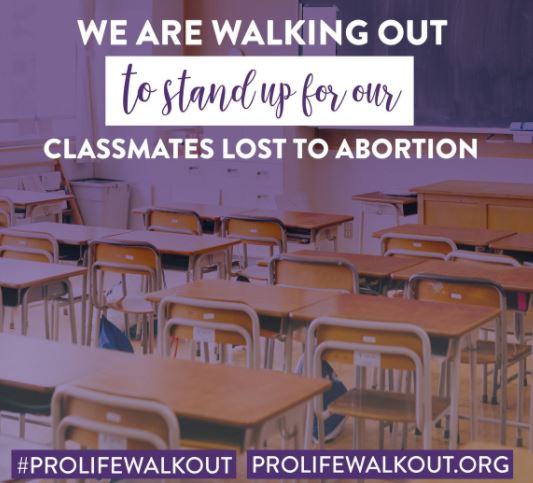 At 10 am this morning, thousands of students from public schools and colleges walked out of class for 17 minutes of silence and prayer.

Officially, students from 200 high schools and 80 colleges are taking part in the walk-out, although the numbers continue to increase.  Last count, somewhere between 350-400 high schools participated.  They are also protesting taxpayer funded abortion.

Holding signs that read, “I am the Pro-Life Generation,” along with “Choose Life,” and “Unborn Lives Matter and “Abortion Has Killed More Than a Third of Our Generation.”

Brandon Gillespie started the event.  He’s a junior at Rocklin High School in California.  But, this event is not being treated the same as the Gun Control walk-out which spurs questions about a double standard. Gillespie was inspired by Juliene Benzel, his history teacher. She was placed on administrative leave after asking if the school would allow a pro-life walkout in the wake of the gun-control student walkout. In a Students For Life of America (SFLA) press release, Gillespie confirmed that his school refused to give the pro-life walkout the same support as the gun-control walkout.

The Pro-Life Walkout is sponsored by Crossroads, Family Research Council, and Kansans for Life of Douglas County.

Over 60 million abortions have been performed in America since 1973. Some call it the American Holocaust.