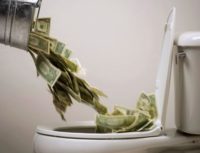 As I was writing the past couple of articles regarding our woeful public
schools, it occurred to me, with some prompting, that most people in
this community have no idea exactly how the school district’s current
budget nearly fifty million dollars is being spent.  If statistics are
any measure, most of it goes for employee salaries and benefits.  As a
taxpayer, you know the drill, property tax, sales tax, income tax, and
any other way the government can squeeze you for your very last dime.
In California, and therefore our local school district, forty percent of
that collection, as well as contributions from the federal government
goes to support our local education.  The theory being that even if you
do not have youth to be educated, society in general will benefit from
an educated future generation.  Progress paid forward.

So in detail let’s look at what that massive outlay of public funds have
brought us when it comes to educating our local youth.

Diversity Score:  0.67 like it should matter when it comes to education!

After that dismal parade of statistics it is important to know, that the
Del Norte Unified School District has the HIGHEST concentration of top
ranked public schools in California.  The County’s High School, Redwood
Elementary School and Pine Grove Elementary are all considered to be
“top Ranked”.  The problem being that only the High School has a testing
rate of over 50%. Four schools are ranked 2/10 and two others at 3/10 in
the testing of the student body.  Could it get any worse, of course, one
school is 1/10.  Imagine that.

Us News and report has Del Norte High ranked #846  within California
(out of 3,162) and #6,367 in the National Rankings. Sounds pretty good,
in the upper half in California, until you know that California is near
the bottom of rankings for schools nation wide. 37th through 42nd
depending on who you believe. Bottom line is the tax paying public is
paying billions of dollars for this walking disaster each and every year
and apparently has NO say in calling a halt to the madness.

It isn’t as if we haven’t had any warning that it was this bad. In the
eighty’s the federal government, no telling how it penetrated their tiny
brains, recognized the problem and attempted to do some thing about it.
Unfortunately, they relied on our “educational princes and princesses”
and have seen the decline steepen.  Here locally the decline of numbers
continues to this day.  Thank Heavens testing did not occur in the
Spring of the 2019-2020 school year or the decline would have been
devastating.

There, of course, is the nonstop bleating for more money, and more
teachers, but 23:1 at the local level doesn’t seem to make much of a
difference, as the fifty million dollar budget can’t seem to halt the
slide.  One might even be so bold as to point out that the rise of the
California Teacher’s Union in the 1960’s seems to coincide with the
decline of public education, if it ever was a good idea in the first place.

With the announcement that students will have returned to school this
week, not really, I was kidding,   What constitutes the current version
of “school” can hardly be called that.  As such, Del Norte Public School
students will be holding a rally at the fairgrounds on March 15,2021
organized by Lily Wilson because they want to go back to school, real
school.  Starting on March 15,2020 denotes the date that public schools
were closed for the most part due to the Covid Virus.  It will have been
a year to the day that something like “real” school was halted and
replaced by something that clearly doesn’t work.  School District, a
memo, even your students know that you are failing them, wake up.