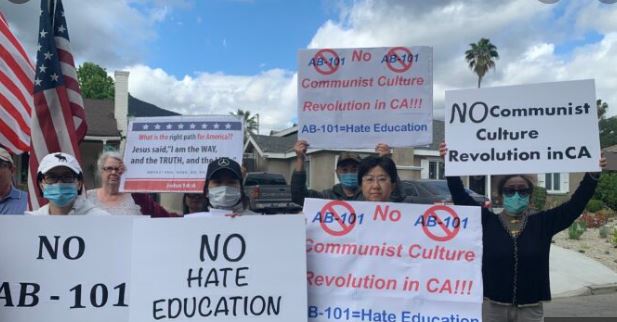 Just about the time you think you understand cancel culture and woke politics, now it’s an effort to try to understand Critical Race Theory.

CANCEL CULTURE: Being ostracized. Most common use is being thown out and banned on social media such as what happened to former President Donald Trump from 1.) Facebook, 2.) Twitter, 3.) Google, 4.) Shopify, 5.) YouTube, 6.) Instagram, 7.) Snapchat, 8.) TikTok, 9.) Apple, 10.) Discord, 11.) Pinterest, 12.) Amazon and related sites including 13.) Parler, 14.) Stripe and 15.) Twilio, For those that deplore the double standard, waiting for Trump to reveal and release his social media platform couldn’t come at a better time. Don’t be surprised to see a mass migration from those 15 sites. Every day people are complaining of being put into Facebook jail, or that something they posted was “against community standards..”

What evidence is there of a double standard? Go to YouTube.com. Plunk in “jihad.” Learn all about terrorist organizations; how they train their children, recruit, allow their women to service the men in Jihad and a lot more horrible and disgusting things too sickening and repulsive to describe here.

WOKE POLITICS: Concerning staying alert to social and/or racial discrimination and injustice. It’s use was made popular from the Black Lives Matter (BLM) movement. When Coca Cola asked their workers to be “less white” consumers decided to boycott Coke. This obsession with race is getting out of hand.

CRITICAL RACE THEORY: A Marxist framework that views society only through the lens of race-based oppression. Critical race theory (CRT) —which espouses the idea that race is not natural, but socially constructed to oppress and exploit people of color—is an offshoot of the Karl Marx-influenced critical theory social philosophy that was promoted by the Frankfurt School of thought.

At least three countries tried socialism after World War II; Israel, India, the United Kingdom and it failed.. It boils down to government thinking they can make better decisions than the people they are supposed to serve. Even Soviet Russia tried it and it failed. As British prime minister Margaret Thatcher observed, “the problem with socialism is that you eventually run out of other people’s money.”

If you’ve studied or observed the countries that have embraced communism, it doesn’t take much to come to the conclusion that communism didn’t work in Russia, in Venezuela, in Cuba, Laos, and Viet Nam because they all had or have a very low standard of living. Even Communist China introduced capitalist reforms in the 1970’s because their economy flat-lined.

Trump signed an executive order and banned CRT training in federal agencies in September 2020 with the White House describing it as “anti-American propaganda.”

Let’s turn our attention to California. Is AB 101 about CRT? The answer is YES.

Assembly Bill 101 is facing opposition by a number of groups because if you read the bill summary, it sounds all nice and good about ethnic studies. Let’s get down to brass tacks.

On April 28th, 2021, the California Assembly Education Committee will hold a public hearing on AB101, a bill that would mandate ethnic studies as a high school graduation requirement. Californians for Equal Rights Foundation (CFER) opposes this bill as a precipitous plan to promote ethnic studies without resolving the controversies around the framework of the Ethnic Studies Model Curriculum (ESMC). We will also testify against the bill during the public hearing.

How do we as a society, ingrained with public education now since 1821, turn the tide on this ever evolving left-wing propaganda? Each state now needs to grapple with the problems that have slowly but persistently been pervading our society.

I was in a meeting Friday afternoon and one member of the group mentioned that CIVICS stopped being taught in 1985. Whether or not that’s true, just judging by the antics of our youth portrayed in the media tearing down statues of our forefathers, or even questioned on the street about our history; it’s pretty clear that public education is not doing it’s job.

In addition to our students failing or underperforming the basics of reading, writing and math, how will they learn love of country if they don’t understand our history, the hardships our forefathers endured in order to come together to create our Constitution and our Bill of Rights?

When public money is used to “educate” our children, there is no place for “anti-American” indoctrination. What will it take to have our public schools return to the basics of education?

What will taxpayer’s do in the event public schools don’t get the message? Stage protests at School Board meetings? Picket School Administration buildings?

How many parents, grandparents and children have to speak up before someone in a position of authority listens?

500 children are missing this year from Del Norte County public education. How many more will have to go missing before our “public education system” gets the message?

TAXATION WITHOUT EDUCATION MAY CREATE THE NEXT BOSTON TEA PARTY.