Taxfighter of the Year – Ourania Riddle 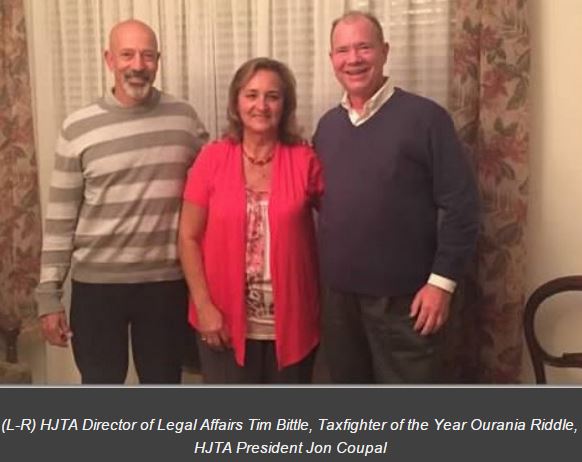 Taxpayer Advocate Ourania Riddle is HJTA Taxfighter of the Year

The Howard Jarvis Taxpayers Association is proud to name Ourania Riddle as HJTA Taxfighter of the Year.

When Ourania, a 30 year member of the Solano County Taxpayers Association, witnessed the unelected State Water Resources Control Board running roughshod over the rights of taxpayers in her hometown of Dixon, she decided to get involved.  The state board had ordered Dixon to spend millions upgrading its sewer treatment plant, or else face penalties of $10,000 per day.  The mandate made no sense because the supposed “pollutant” in the City’s effluent–salt from water softeners–was not harmful to human health, and decades of test data proved that Dixon’s drinking water did not contain salt anyway.

After consulting with experts, Ourania was convinced the state’s science was faulty.  She then testified before the Little Hoover Commission about the state board’s bullying tactics and met with state legislators to introduce a bill that would authorize cities to ban salt-based water softeners.  In 2009, Governor Schwarzenegger signed AB 1366 (Feuer) into law.

Armed with the new state law, the Dixon City Council adopted an ordinance requiring all new water softeners to be salt-free and all existing salt-discharging softeners be removed and surrendered to the City.  The ordinance included a buy-back program.

Notwithstanding the progress the city had made with Orania’s leadership, it still wasn’t enough to satisfy the state water board.  Under renewed threat of daily fines, the City Council approved the expensive treatment plant upgrade, and a hefty rate increase to fund it.  Ourania wanted the City to fight for more time so that the remaining illegal water softeners, estimated at over 500, could be removed.  She and her friends circulated an initiative petition to repeal the rate increase.  They collected signatures totaling more than 15% of the City’s registered voters, enough to force a special election.  Instead of placing the initiative on the ballot, however, the City sued to invalidate it.  Ourania’s group, represented by the Howard Jarvis Taxpayers Foundation, defended the initiative in court.

While the Court subsequently ruled that the taxpayers’ effort to use the power of initiative was invalid, Ourania and her crew succeeded in changing state law and put the City of Dixon on notice that its taxpayers are organized and are carefully watching costs.

Ourania has served as the president, secretary and treasurer of the Solano County Taxpayers Association.  She is on the Board of Advisors for the California League of Bond Oversight Committees, which provides training and help to the local oversight committees that police the expenditure of school bond funds.   Ourania has served on the Solano County Grand Jury and on the Board of Directors of the California Grand Jurors Association.  She is also an active member of Californians Aware, an organization that helps journalists and others enforce California’s open meeting laws.  And of course, she is a long-time member of the Howard Jarvis Taxpayers Association.

HJTA President Jon Coupal praised Ourania for her contributions to her state and community, “We want to recognize Ourania and all those unsung taxpayer heroes who improve our lives by volunteering their time and energy to act as watchdogs over government spending and who prod government to make more efficient use of taxpayers’ dollars.