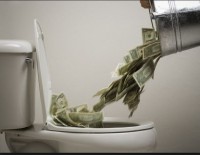 The County’s 5-0 Club, better known as the Del Norte County Board of
Supervisors, met in another of the bi-monthly meetings to behave as
expected, pass everything unanimously without a single dissenting
vote.  Seems that’s what’s expected by the County’s bureaucracy when the
board consists of five tamed lap dogs.  Not a single question was
uttered over the course of the rather brief hour long meeting that had
any hint that the “five” were much more than programmed to speak the
word “yes” when prompted by the secretary of the board.  So much for the
concept of a “Representative Republic”.  The bureaucratic hires have
that one covered.

Along with the usual new hires and proposed new positions on the agenda
for the Department of Health and Human Services, six in all, the
remainder of the business consisted of money for contracted services
that our bloated local bureaucracy is unable to cope with.  Of course we
have the usual plea for understanding, per Supervisor Starkey, ” if we
don’t load up on unnecessary services we are accused of providing too
little, and if we do load up on services, we are accused of government
overreach.  Clearly the Board has chosen the former, as for years the
County’s government has loaded up on services, yet the litany of
complaints have not subsided.  Perhaps it is time to listen to those
that say the County is wallowing in government overreach and see what
happens.

It is interesting to note that many on the current board are either long
term government employees, or have spent an inordinate amount of time as
elected officials.  Supervisor Howard and Supervisor Starkey are two
sides of that coin.  Promoting their time in service and the need for
that “experience” seems to make them both think that somehow that puts
them in a better position to understand the vagaries of government
activities.  Sad to say, but it appears to make them less likely to
arrive at any decision making that is not packaged and tied up in a red
bow waiting to be sent off with a rubber stamp.  The public ignored, and
bureaucratic life goes on unimpeded.  Occasionally the wand of the
County’s Counsels is waved over the ensuing mess as if to give it some
kind of religious like blessing, before speeding off to the next item on
the agenda.

Government incomprehensible, regularly given the official “this is the
way things are done” mantra, after all we can’t be expected to behave as
if this is the real world now, can we?  Money by the bushel to be handed
to the intermediaries who are hired at the drop of a hat to make
pronouncements as to the legitimacy of the path forward, likely with the
helping hand of a small legion of local officials who for some unknown
reason can not give that complete sense of security to the board when
they are obligated to raise the stamp graced with the word “yes”.  Such
a pathetic form our government has degenerated over the course of two
hundred and fifty years or so, from the state it had originally been
spelled out to include.  Small government requiring little in the way of
taxes to support the few things it was meant to treat.  Likely our
current County’s government will have dwarfed the entire composition of
the original federal government.  It would be an interesting comparison.

No need to bore anyone to death over the contents of today’s Board
meeting, as paint drying on a wall was likely to be much more
interesting.  As I have concluded after watching many a meeting, there
is the question that crops up routinely, “Why have a Board in the first
place when they serve no better purpose than to be ceremonial?”  The
several hundred thousands per year could be much more productively
spent.  Tragically I grew up in a world where a person’s character had
to be tested for signs of maturity and the ability to solve the many
problems faced in the world without the hot breath of government
whispering advice in one’s ear.  While I expect  many of those
characteristics are still embedded in the persona of many Americans, not
so much in the character of many American politicians.  Our 5-0 Club
most certainly could use a few lessons in “How to keep government out of
most citizens lives”.  Faint hope as we are dealing with thirty years of
government service on one hand and two plus terms of Sacramento hob
nobbing on the other.