The 5-0 Club, Or Rather The Robots Meet Again 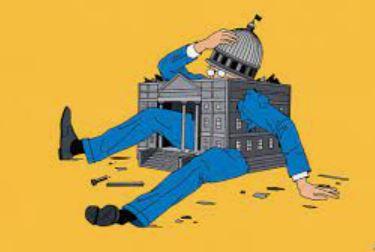 It has almost become a carefully orchestrated performance when the
County’s leadership meets every other Tuesday at 10:00 am.  So carefully
choreographed and artificial that one wonders who, exactly is running
the show.  As much as there was expressed dissension in the ranks by
Supervisor Starkey and Masten, when it came time to vote, they dutifully
registered their respective “YES” votes, so as not to show anything of
the sort.  It has become so nauseatingly familiar that one wonders if
they draw straws premeeting to see who will be selected to pretend
something is not to be a clear 5-0 of affirmation of whatever is the
topic at hand.  It seems to be the pattern, 5-0 to the affirmative or
move it to a later meeting where it can receive its 5-0 anointing.

It is beginning to look like going to the public meetings of the Board
will continue in this fashion until the voters grow weary of being gas
lighted into believing the five members of the Board actually represent
them to their benefit.  It would appear various heads of department have
a great deal more to say about what happens within the sacred confines
of government in Del Norte County.  Other than the plainly obvious gas
lighting that seems to come out of Supervisor Howard mouth at every
Board meeting, one can be assured that anything, no matter how
convoluted that appears on the “Consent Agenda” will pass into
affirmative action with barely a ripple.  It matters not that the public
is likely completely unaware of the content nor how it affects them, as
Chair Hemmingsen has little patience for any such discussion of items he
so clearly has very limited knowledge as to their impact on the community.

There was a brief, but interesting discussion about Board Member
decorum, that dissembled its way into oblivion, as well as an effort by
Supervisors Masten and Starkey to engage the public in the budget
process.  The effort was well received by members of the public present,
over the opposition of Supervisors Howard, how telling, and Chair
Hemmingsen, no great surprise there.  Chair Hemmingsen likes to flex his
long standing membership on the Board of Supervisors, where he has
displayed his ignorance over various matters for many years.  While Ms.
Masten and Starkey’s request did result in the possibility of some
action, most likely it will be in vain.  The County’s budget to the
uninitiated is well over one hundred pages, most of which will be
meaningless to anything other than the auditor and the governing
bureaucracy.  Any questions asked will likely elicit answers that are
likewise meaningless, or assurances that “I will get back to you on that”.

Actual business consisted of encumbering local businesses with another
pointless licensing, parking ordinances, more homeless issues
unaddressed, a noise ordinance, and a lengthy discussion of “vacation
rentals”.  Lots of word salad, most of it missing the point of why it
was necessary at all.  And true to form all was either approved 5-0 or
tabled to a future meeting.  One other item of note was a clear
understanding that Animal Control is far from being a functional part of
the County’s efforts to spend money for what clearly continues to be a
non functional operation.  Heaven help the Sheriff as his non functional
department will find themselves gifted by the BOS of this “problem
child” in November.

Budget transfers and Legislative issues rounded out this theatrical
farce.  Any signs of life remain undisturbed from this cast of robots.
The 5-0 Club will take on the impending 2022-2023 budget next time
around.  $182,000,000.00 and counting.  Nearly doubling from 2010 with
no perceivable progress towards righting the ship.  In fact the only
thing current leadership is concerned by is being restricted in token
ways of ballooning the government’s workforce and pay generously to that
workforce while the rest of the County population goes wanting.  Not so
much road repairs and any improvements in “vital” services, that after
all will be saved for the next time the County’s “slush fund” proves
inadequate to the task of giving more and better raises and growing
government.  It is after all our only “growing” year round “industry”.

One thought on “The 5-0 Club, Or Rather The Robots Meet Again”