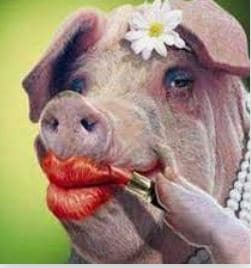 There is only so much a person can do when government has money to burn
and absolutely no vision of what they are doing now will only add to the
financial burden in the future, when there is no money to burn.  On
Monday, the local  Transportation Commission approved placing $400,000
more dollars into the hands of the City to commence with the ill advised
“pig with lipstick”, also known as the “black hole” called Front
Street.  The total bill should Front Street be completed as near to the
2015 Master Plan will close on $20 million.  Add the Beach Front Park
face lift and the City Pool, we are looking at closer to $30 million.
Sure the City Fathers will say most of it is “grant money”, but the
reality is that it comes from some place too, some of it from your
pockets…

What is sad, is the fact that once the $30 million is gone for all the
“new” stuff, it then becomes the City’s task to make sure it stays
looking good, managing it, and providing maintenance, not exactly a
cheap prospect.  The City Council is hot to spend the money they
currently have in hand and is oblivious to what happens afterwards,
after all, they can claim to have “done it, let the suckers who come
after us worry about how to keep it together”. Nearly $400,000 per year
just to back fill the short fall maintaining the pool, no telling how
much the rest will cost. Again, who cares, except those that are still
around and have to pay for it.

It is a chronic issue with government, particularly when they receive
baskets full of grant funding and new tax revenue.   The wish list
becomes possible in a way it never otherwise would have.  The Council
has received several windfalls over the past year and it is burning a
hole in their pockets to spend it as fast as they can.  No thought to
the future, just spend it willy nilly as if the sky will never fall. The
$2.2 million dollars projected to have come from Measure “S” money can
now be used for police, fire, and emergency services, something that
should be priority number one for the City’s General Fund.  But, No, now
with the Measure”S” money to spend in those three areas, VOILA, it opens
up the General Fund check book to the tune of $750,000 for……THE
FRONT STREET PROJECT!  SOMETHING THAT WOULD NOT HAVE BEEN POSSIBLE
OTHERWISE.

Will wonders never cease…Ordinarily the City’s General Fund takes care
of most of the expense of police, fire, and emergency services.  The
funding available through that source may not provide the ability of
those departments to fill their wish lists, but it is normally adequate
to provide the level of service necessary.  The Measure “S” money wasn’t
supposed to increase staffing levels or pay for staff that would
typically be funded in the City’s normal operating costs.  When the City
can leverage Measure “S” money to “Take Care” of regular services, low
and behold, suddenly the City has $750,000 to pump into the Front Street
extravaganza.  How surprised am I…..

Lest we not forget, the County of Del Norte also has a new slush fund
known as Measure”R” which is currently being utilized in the same
fashion as the City.  Generous raises that ordinarily would not be
possible for the most part with the County’s General Fund are suddenly
possible.  New employees in the various departments other than police,
fire, and emergency services are suddenly possible.  Expansion of both
the police and emergency services with new employees now possible.
Various departments suddenly have room in their respective budgets to
start filling that wish list that was always just out of the department
budget’s reach. Curious how all that works.  Oh, you were expecting the
Citizen’s Oversight Committee to head all that off and keep it on track.
Fat Chance!

As we have recently learned from the experience with the Del Norte
Unified School District’s COC, they have no power to protect the public
period.  As the School district’s needs changed with time, the promises
as to how to spend the money were jettisoned with unseemly haste to fund
fairy tales and puppy dog tails that the District had no other means to
fund.  Say rapidly increasing teacher salaries and benefits?  Sounds oh
so familiar, as I believe both the City and the County have gone to that
well just recently.  3% raises for City employees, and 7% to 12% for the
County’s poverty stricken crew.

This can be corrected;  however, in November when the repeal of both
Measure “R” and “S” will be up for a redo.  Between now and then both
governments will be “gaslighting” the public about how desperate the
need for the continuation of both tax measures is critical for the
continuing level of service offered by both.  The reality is that both
must “get real” and begin to find ways to live within their means like
everyone else.  The public does not have the luxury of going down the
street to their neighbors asking for money to buy things that are on a
wish list.  Both the City and the County need to learn that lesson as
well……..