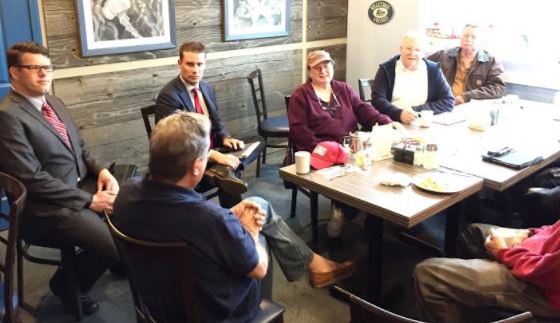 
A lesson in grass roots democracy

“I felt so humiliated.” she said as she came away from giving her 3 minutes of testimony to the board of supervisors. She felt that, even though she was passionate about the topic and gave a good argument, there was no reaction from any member of the board. “Did they even hear me?” She asked, yet this happens all the time. It’s not that the board of supervisors don’t want to react, but rules of procedure discourage it.

There has to be a better way. People need to have a forum where they can present their arguments, suggestions, ideas or just vent to a county supervisor or two, at a date that is of their choosing and not have to wait two weeks for a board meeting. Citizens want to have a dialogue with their elected officials where they can express whatever is important to them in a non threatening forum. Thus was born, The Daily Town Hall Meeting.

This week marks the first anniversary of The Daily Town Hall Meeting. Some county supervisors have made the commitment to have at least one supervisor to be available to the public every week day. The meetings are held at the Fisherman Restaurant, away from any county office. The meetings last just one hour, from 6 am to 7 am and is open to any member of the public. Even though the meeting is held in a restaurant, no one is obligated to order anything as a condition of their attendance.

No topic is off limits. Subjects up for discussion are whatever the attendees decide. Every person has the opportunity to be heard. Not only do they get feedback from a county supervisor or two, but they also get their ideas vetted by others who are there.

This is true grass roots democracy in action. Sometimes people in attendance want the board of supervisors to take action on a problem like the problem of not having restrooms for visitors to South Beach during the 4th of July. This resulted in board action to get Porta-potties placed in that area during that time period. Another item that was important to folks was that they felt that elective public service should be limited and not become a career. Last year the board of supervisors agreed that you should have a say in the matter and voted to have it placed on this years election ballot.

These are just two examples where good arguments presented at The Daily Town Hall meeting resulted in significant change.

Sometimes other elected officials will participate in the meetings. Recently State Senator McGuire attended and listened to arguments for and against SB-1, which involved an increase in the gas tax to fix California’s roads. Senator McGuire listened as people made the arguments for and against having cannabis legal in Del Norte County. Some members of the harbor commission attended a meeting to bring attention to the financial problems facing the harbor. Current and former city council members wanted to talk about items of interest to them. In every case, they got feedback from other elected officials and members of the general public looking to help explore solutions.

The fact is that a couple of the members of the board of supervisors have made this commitment to you, to be there for you whenever you have a reason to meet with a county supervisor. Naturally there are rules that no more than two supervisors can be together to discuss items that may end up on the county’s agenda, so if ever there are three supervisors who show up, one of them has to leave.