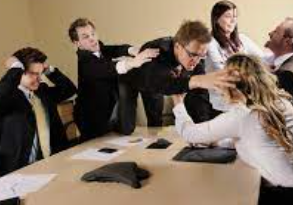 If I were a fly on the wall of the School Administration people wondering who to pick to lead the meetings so as to rubber stamp everything the School wants, I would venture to guess it went something like this, “Let’s pick the most incompetent, unknowledgeable, untrained person to be the Chair of the Citizens Oversight Committee (COC) and that would be Stephen Lyon”.

At one point, Chair Lyons tried to get county resident Linda Sutter to sit down and stop her public comments. What did he do?

He banged his gavel. Not once. Not twice, but constantly and irritatingly for a minute, maybe longer. Who knew how long? What we did know is that Crescent City Police Chief, Richard Griffin was called in. Good thing too. Because during that melee, Linda Sutter was yelling to be heard while Chair Stephen Lyon was banging that gavel.

Chair Lyon frequently stated he did not have training. Then why is he Chair of this important committee?

The regular meeting started somewhere in the vicinity of 3:15 pm Friday afternoon of October 22nd. When the clock came close to 5 pm, he than told people of the public to make their public comment brief or he didn’t want to call for public comment at all.

Margaret Sargent got up to deliver her public comment.

Chair Lyon, “Can you make it brief?”

Police Chief Griffin, “Chair Lyon, she has 3 minutes to do her public comment.”

If that was the worst of the meeting I would stop here, but clearly that wasn’t. Didn’t even come close. If you could have heard the laughter every time Chair Lyons made a stupid remark, you would have thought we were at the Comedy Club.

During my public comments I asked them if they understood the definition of “Fiduciary Responsibility?” Apparently they don’t. “A fiduciary is a person or organization that acts on behalf of another person or persons, putting their clients’ interest ahead of their own, with a duty to preserve good faith and trust. Being a fiduciary thus requires being bound both legally and ethically to act in the other’s best interest.”

To illustrate the point, I went on, “When I was a life insurance agent in Southern California, my manager at Metropolitan Life Insurance would drum into us, ‘your fiduciary responsibility is to put the clients interest above your own’.”

“Because you (members of the Board) are not doing your fiduciary duty I’m having to learn about these things. And what I found out is that bond money is NOT to be used for repairs, only capital improvements. Yet millions of dollars have been spent on repairs. Then there’s Steve Morgan earning $3,000/month. Bond money is not supposed to be spent on payroll when there is no time card yet he’s being paid $3,000 a month; month after month after month. Why is that happening?”

But that’s not all, folks. There’s more to the disaster. These people have been on the board for 2 years with the exception of Karen Sanders. Karen worked for CalTrans and suffered the loss of her toes or part of her foot in an accident at Last Chance Grade. The good news is that she can now walk with a cane. The bad news, she’s a late comer to the COC representing a taxpayers association. Seven members are required. Somewhere along the line they now have eight. I don’t know when Karen was sworn in. Maybe over the summer. I don’t know what tax association Karen is associated. I do know she’s not a member of the local Crescent City-Del Norte County Taxpayer’s Association. I’ve known Karen Sanders for years and she’s Chairwoman of Del Norte Republicans. However, based on her comments during the meeting she appears to be as untrained about the COC as the other six on the board with one exception. Board member number eight is the only one asking questions aimed at protecting the public and that was board member Angelina Countess-Bieber.

Linda Sutter didn’t want to get involved in public school issues as she has enough to deal with between the Board of Supervisors, the City Council, the Harbor Commission and the Fairgrounds to name just a few of our government entities that need to held accountable. But when she deduced that the public appears to be getting fleeced of their tax dollars, she dove in with both feet. She found the California Association of Bond Oversight Committees (CABOC). She arranged to have us attend a four hour ZOOM meeting with CABOC. Jeff Napier attended as did Charlaine Mazzei from the School Board and Angelina Countess Bieber of the COC. When Linda discovered that 12 years of documents and reports were neglectfully not posted to the school’s website for the COC, she made a point about it. Within eight hours, documents and reports were put up on the site. Not that the docs/reports were complete, but at least it was a start. And actually several required documents were not there like minutes of meetings.

There was no reason that the rest of the COC board couldn’t make time to attend and learn about running a proper Citizen’s Oversight Committee. I venture to guess that I learned more this past week about COC’s than the COC board has learned in the past 2 years.

Then there’s the issue of not posting documents:

Not posting documents and reports goes to the issue of transparency. There are rules and regulations that the COC is supposed to go by. After all it’s dealing with our tax dollars and how they are being spent under the best of circumstances and squandered under the worst of circumstances. If that was the worst of this disaster, I would stop here. But lack of transparency is not the worst part. As a reminder, so far I can’t stress the point enough that this board is untrained and unknowledgeable as to the proper procedures and fiduciary responsibility on managing our tax dollars. In my opinion, they have up to this point been a rubber stamping outfit, with the exception of board member Angelina Countess-Bieber.

One more point to be made. I’ve thought for some time that there need to be benchmarks on the proficiency of our students. If they are under 50% at each grade level on subjects like English/Reading, Math, or Science, the position of the public should be to oppose any bond until those levels improve. Everyone seems to forget the reason for these schools is to educate our children and that is a failing endeavor for the most part. Too much indoctrination; inappropriate sex education, CRT, mangling of pronouns, tearing down America and learning to be a racist.

Fortunately, between board member Angelina Countess-Bieber and the public’s comments, the Board minus Chair Lyon was wise enough to table several agenda items. He voted NO on tabling these important matters. He wanted to push through the Audit Report. A suggestion was made to appoint sub-committees to look into these issues in more depth. Folks, they are way, way behind the curve on deducing answers to questions about expenditures and whether or not fraud or misuse of public funds is involved. These and tabled agenda items are to be discussed at the next board meeting to be held sometime in November.

COC member, Angelina Countess-Bieber has been trying to get answers to legitimate questions since being on the COC Board. Chair Lyon’s response has been to ignore her. We’ll get into that in more detail in Part 2 of The DISASTER of our $25 Million School Bond Citizens Oversight Committee.