The end of daylight saving & back to Standard Time 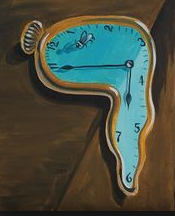 Credit to Salvador Dali for a picture of his clock.

Why do we even have daylight savings time, and why does it end on November 1st?

It’s not a new invention.  Ancient civilizations adjusted their daily schedules  to the Sun’s schedule for example during Roman times.

It’s supposed to make better use of daylight and conserving energy. Benjamin Franklin wrote to a Parisian editor in 1784 that candle use would cut back if people rose earlier and took advantage of the natural morning light. On average, Franklin estimated Parisians would awaken at noon and sleep six to seven hours after sunrise. Candlelight was used for these six additional hours in the evening. How did he discover this?  He was serving as the American minister to France. “An accidental sudden noise waked me about six in the morning,” he wrote, “when I was surprised to find my room filled with light. I imagined at first that a number of lamps had been brought into the room; but rubbing my eyes I perceived the light came in at the windows.” His attendant had forgotten to close the shutters the night before, and Franklin was astonished to see sunlight streaming into his room. To his dismay, it was just six o’clock in the morning.

In 1905, a British builder, William Willett, suggested moving the clock ahead 20 minutes each Sunday in April, then back again each Sunday in September. But the idea and the bill was opposed by many including farmers and never went anywhere.

Finally, in 1916, Germany was the first country to implement Daylight Saving Time (DST) because of the first World War.  They wanted to minimize the use of artificial lighting in order to save fuel for the war. Britain, the US and many other countries followed suit and Standard Time was put back into effect after the War ended.

President Woodrow Wilson signed it into law in 1918. The initiative was sparked by Robert Garland, a Pittsburgh industrialist  and city council member, who had encountered the idea in the United Kingdom. A passionate campaigner for the use of DST in the United States, he is often called the “father of Daylight Saving”.

Then, President Franklin Roosevelt enacted year round DST in 1942 until 1945. It was started 40 days after the bombing of Pearl Harbor.

After WWII, train schedules, bus schedules and broadcasting complained about DST.  Congress finally enacted the Uniform Time Act of 1966 that stated DST would begin on the last Sunday of April and end on the last Sunday of October. However, states still had the ability to be exempt from DST by passing a local ordinance.

The U.S. Congress extended DST to a period of ten months in 1974 and eight months in 1975, in hopes to save energy following the 1973 oil embargo. The trial period showed that DST saved the energy equivalent of 10,000 barrels of oil each day, but DST still proved to be controversial.

DST is in use in over 70 countries worldwide and affects 1 billion people. Arizona, for the most part, does not have DST except by the Navajo Nation community.

This year DST ends at 2 am on Sunday, November 1st.  If you haven’t turned your clocks and watches back yet one hour yet, now’s the time to do it.